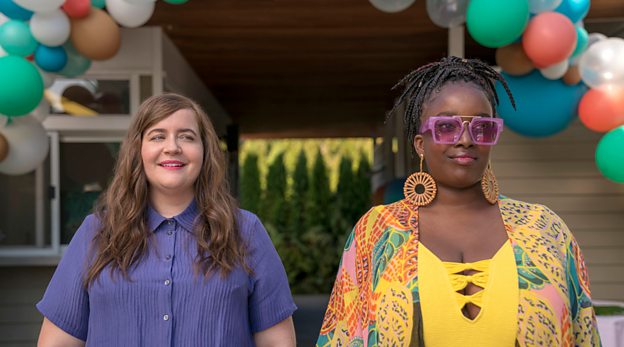 Aidy Bryant (Saturday Night Live) returns as Annie, who’s feeling pretty good after having faced her demons - her mom (Julia Sweeney), her boss (John Cameron Mitchell) and her troll. With boyfriend Ryan (Luka Jones) and best friend Fran (Lolly Adefope) by her side, she’s ready to take on the world.

But was hastily quitting her job and jumping into a relationship with someone a little less than career-focused the best idea? Annie’s on a path to self-discovery, joined by both Fran and her mother, as they figure out what they really want in life.

While Annie doesn’t always find it easy, she’s no longer the doormat she once was. She's determined and she’s only just getting started...

Episode one: Camp
Annie quickly discovers that it’s not the best idea to make big decisions while on an adrenaline high.

Episode two: Kevin
It’s the first day of Annie’s freelance career and she’s buzzing to have nobody but herself to answer to. And what’s the first step of her new professional journey? Interviewing the troll (Beck Bennett).

Episode three: Skate
After a month of being her own boss, Annie is starting to crack. She can’t find work and she misses her old friends from The Thorn. Ryan (Luka Jones) comes with her to Ruthie’s (Patti Harrison) roller-skating birthday party, where Annie has to save face in front of her friends - and of course, Gabe (John Cameron Mitchell).

Episode four: Freak
Annie's professional life is looking shaky and she knows she needs to do something about it. But at least her love life is looking up. She takes Ryan (Luka Jones) to dinner with her parents while Fran (Lolly Adefope) takes herself out on a solo date.

Episode five: Wedding
Annie (Aidy Byant) accompanies Fran (Lolly Adefope) to her cousin's wedding as her "emotional support animal" - but sometimes even Annie's levels of loyalty and support aren't enough to protect Fran from the feeling she's a disappointment to her family...

Episode six: WA-HAM
Annie (Aidy Bryant) is covering a women in business conference for the Thorn. But Annie quickly finds she has mixed feelings about the feminist credentials of WA-HAM (Women Are Having A Moment).

Episode seven: Salon
Gabe (John Cameron Mitchell) invites Annie (Aidy Bryant) to a sophisticated soiree at his house. The Thorn’s publisher, will be there and Annie needs to make a good impression. Ryan (Luka Jones) goes as Annie’s date, on the condition that they can leave halfway through so he can go to his monthly burger eating competition.

Episode eight: HR
Annie (Aidy Bryant) has to go endure a humiliating office meeting. After a difficult month for Fran (Lolly Adefope), she wants to arrange a party for her friends, to be known as 'Franfest'.

Shrill is an 8x25’ series produced by Broadway Video and Brownstone Productions in association with Warner Bros. Television.