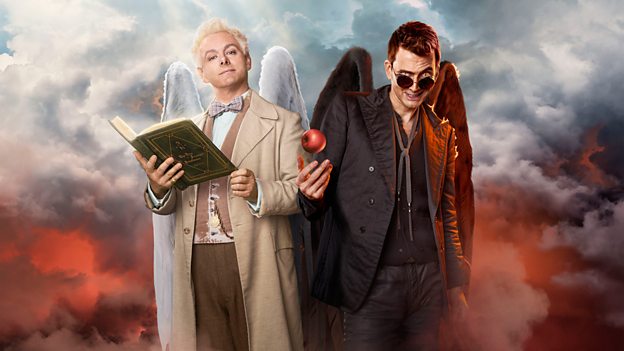 Equal parts humour and horror, fantasy and drama, this 6 x 1 hour series is written by Neil Gaiman and is based on the well-loved and internationally bestselling novel Good Omens by Terry Pratchett and Gaiman.

Sheen stars as the fussy angel / rare-book dealer Aziraphale, while Tennant plays his opposite number, the fast-living demon Crowley, both of whom have lived among Earth's mortals since The Beginning and have grown rather fond of the lifestyle and of each other.

So it’s really terrible news for both of them that, if Heaven and Hell have their way, the world will end on Saturday. Everything appears to be going according to Divine Plan. Except that someone seems to have misplaced the Antichrist…

Aziraphale and Crowley agree to join forces in order to prevent Armageddon.

They attempt to raise the Antichrist in a balanced and human way, but are they focusing their efforts in the right direction?