Inside Europe: 10 Years Of Turmoil 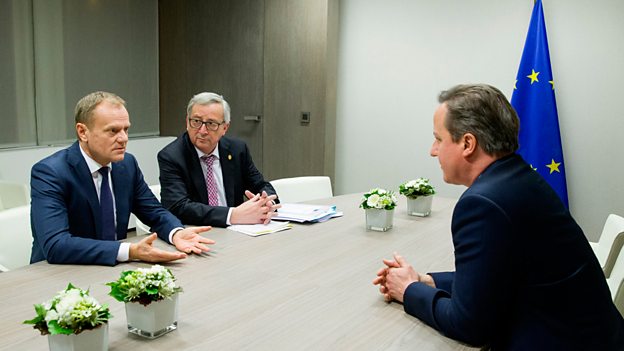 Opening the lid on the fierce arguments and clashes of personalities between Europe’s leaders, as they struggled with crises which could have torn the union apart.

The latest political box-set from Brook Lapping and acclaimed series producer Norma Percy. In the unique Brook Lapping style, these stories are told by those who were in the room when the key decisions were taken.

For the first time, Europe’s Presidents and Prime Ministers and their closest advisers take us back behind closed doors, where they battled night after night to keep the European Union together. The series shows leaders such as French President Nicolas Sarkozy and European Council President Donald Tusk not just as politicians, but passionate people trying to defend their project and their countries - with all the contradictions that involved.

Episode one: We Quit
Episode one tells how David Cameron was pushed by the Conservative Party’s fixation with Europe to call the Brexit referendum. Douglas Carswell and Daniel Hannan reveal how they sought to turn up the heat on the Prime Minister. For the first time on television, William Hague, George Osborne and Nick Clegg reprise the arguments inside Government that led to the decision which sparked the biggest political crisis since World War Two.

Osborne warned against a gamble that could be a "disaster for Britain", but Hague thought there was no other option, saying: "this was coming. Either we had to lead that or be the victims of it".

European Presidents Jean-Claude Juncker and Donald Tusk reveal how Cameron negotiated with EU Leaders over the concessions he felt he needed to win the referendum - and how the Europeans saw it.

Cameron’s closest advisers - including his Press Secretary Gabby Bertin and Ambassador to the EU Ivan Rogers - describe the increasingly desperate negotiations, including a last-minute push to get the concessions which would ensure that the then Home Secretary, Theresa May, would back remain.

As he runs up against Europe’s leaders, Cameron comes unstuck. French Presidents Nicolas Sarkozy and Francois Hollande, Dutch Prime Minister Mark Rutte, Angela Merkel’s top Europe advisers and other key players recall warning Cameron against picking a fight, and how their vision of the European Union differed from his.

Ultimately, Cameron couldn't deliver enough to win the referendum. In a final, emotional farewell to his fellow EU leaders, there is regret on both sides.