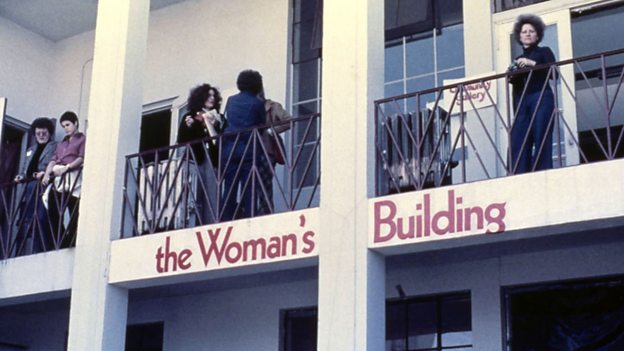 Out of the tumult and fervour of the end of the 60s emerged a generation of artists who set out to start a revolution. As women around the world joined forces to fight for liberation, the formative art movement of the last four decades was about to explode into being.

On both sides of the Atlantic women were tearing up art history, reinventing the arena of art with experimental new mediums and provocative political statements.

In LA, Judy Chicago founded the first feminist art course and told her students to only study work by women. In London, Mary Kelly was causing tabloid outrage by displaying dirty nappies at the ICA, while Margaret Harrison’s depiction of Hugh Heffner as a bunny girl resulted in her exhibition being shut down by police, claiming it was offensive to men.

Alongside interviews with Turner prize winner Lubaina Himid, Suzanne Lacy, Carolee Schneemann, Rose English, Laurie Simmons, and Barbara Kruger, The Great Art Fightback tells the story of these revolutionary artists and celebrate the grit, humour and determination that wrote women back into art history, for good!

The Great Art Fightback (1x60') was commissioned by Cassian Harrison, Channel Editor BBC Four and Mark Bell, Head of commissioning, Arts and is being executive produced for the BBC by Emma Cahusac. The Executive Producer for What Larks! is Claire Whalley and the director is Clare Tavernor.

As previously announced, Rebel Women: The Great Art Fightback is scheduled to transmit in the UK this summer as part of BBC’s Hear Her  series, which will mark the anniversary of women’s suffrage.