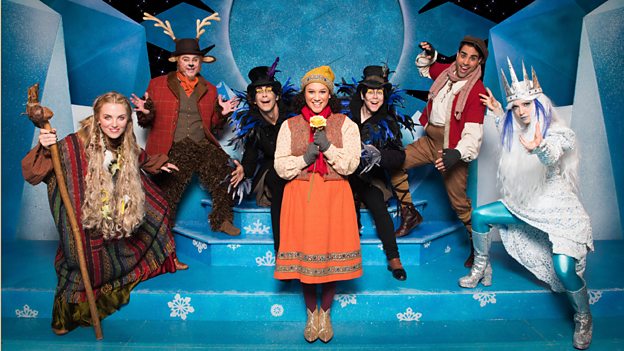 Confirmed for CBeebies on 15 December at 5pm to 5.45pm

In an all-singing, all-dancing production, best friends Kai and Gerda find out the true magic of friendship and love, as Gerda sets out to save Kai from the Snow Queen before she freezes him forever.

With more than 376,000 applications for tickets this year, the CBeebies Christmas Show has become a firm seasonal favourite. CBeebies’ The Snow Queen takes parents and children on a magical journey of friendship, love and laughter, with a hint of peril. And with an array of catchy new songs composed specifically for this year’s show, this wintery tale will warm the hearts of audiences everywhere.

CBeebies’ The Snow Queen features many of the most popular stars of CBeebies, including Cat Sandion, Rebecca Keatley, Andy Day, Justin Fletcher, and the crew of Swashbuckle, plus they’re joined for the first time by popular newcomers Dr Ranj and Maddie Moate.

Ten local Leicestershire children also got the chance to appear alongside their TV heroes as playful villagers and dancing flowers.