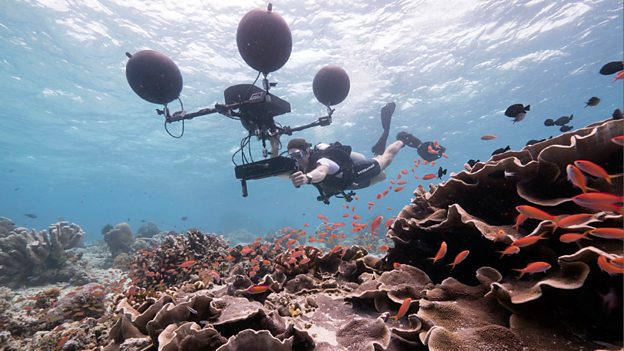 Blue Planet II explored parts of the ocean that nobody has ever visited, encountered extraordinary animals, and discovered new insights into life beneath the waves. In Our Blue Planet, Sir David Attenborough examines the impact of human life on life in the ocean.

With evidence of albatross parents unwittingly feed their chicks plastic, mother dolphins potentially exposing their new-born calves to pollutants through their contaminated milk, and even man-made noise drowning out the natural sounds animals use to communicate, many creatures are struggling to survive.

Despite these devastating impacts, this film contains an inspiring message of hope.

Fifty years ago Norwegian spring-spawning herring were almost wiped out. Today, the recovered herring stocks offer one of the greatest spectacles in the ocean, as hundreds of humpback whales and orca gather for the feast.

In the Galapagos one scientist has devoted much of his life to saving the largest fish in the sea - the whale shark. In the Caribbean, a community is working to save giant leatherback turtles by protecting the eggs and animals they once took as food.

But some changes in the ocean will require a global effort: warming seas threaten vast coral reefs, and predicted rising sea levels could impact the lives of hundreds of millions of people around the world.