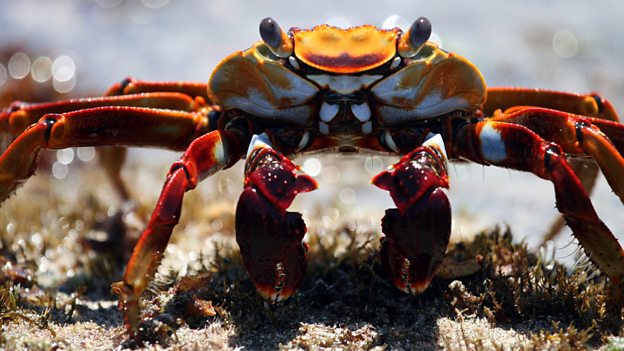 At the coast, two worlds collide. Coasts is the story of how our Blue Planet's wildlife survives in this ever-changing world. It's a roller-coaster ride of heart-stopping action and epic drama, with characters from the beautiful to bizarre.

Sixty-kilogram tuna are far too fast for sea lions to catch, but the sea lions herd their prey as a team. Trapped in the shallows, the fish are easy pickings.

Land crabs leap from rock to rock, desperately avoiding the water. Moray eels launch themselves from rock pools to attack. They, like octopuses, will crawl across dry rock in search of prey.

After a 60-mile return flight, a puffin returns with one precious beak-full of food. But now returning puffins must fight dramatic duels with fast and aerobatic skuas to deliver the food to their pufflings.

In the Pacific, the bizarre Leaping Blenny lives above the tideline in miniature caves. A male tries to attract a mate - but waves are a constant hindrance. These are fish that hate water!

King penguins must brave the biggest wall of blubber on the planet - thousands of gigantic elephant seals - and endure a month with no food, while they moult.