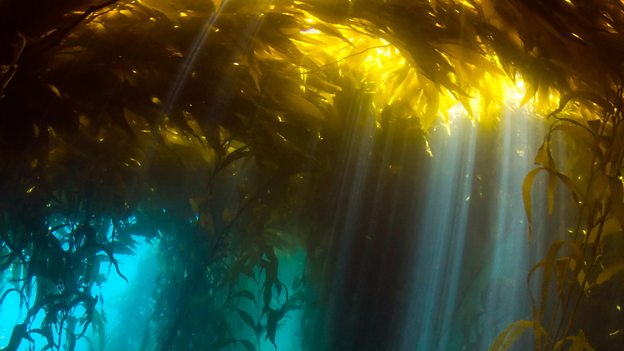 In our green seas, competition is fierce. Sunlight powers vast kelp forests, mangroves, prairies of sea grass and blooms of algae. Here, animals must fight for space and food.

In kelp forests, a Common Octopus must become the ultimate escape artist to avoid its nemesis, the Pyjama Shark; and a Garibaldi Damselfish defends its seaweed garden from marauding sea urchins - and Sea Otters prove an unlikely ally.

On prairies of Seagrass, Tiger Sharks play a game of cat-and-mouse with Green Turtles. This keeps the Seagrass healthy.

In shrubby meadows of seaweed, a vast army of Spider Crabs emerge from the depths for an annual mass moulting, while trying to avoid predation from monster, stingrays up to four metres long. And male Giant Cuttlefish compete for a mate - while a smaller male wins by pretending to be female himself.

In the mangroves, a Mantis Shrimp abandons his mate of possibly 20 years for a larger female. Elsewhere, dolphins, whales, sea lions and birds race to a feast - vast shoals of plankton-eating fish attracted by a bloom of microscopic algae.