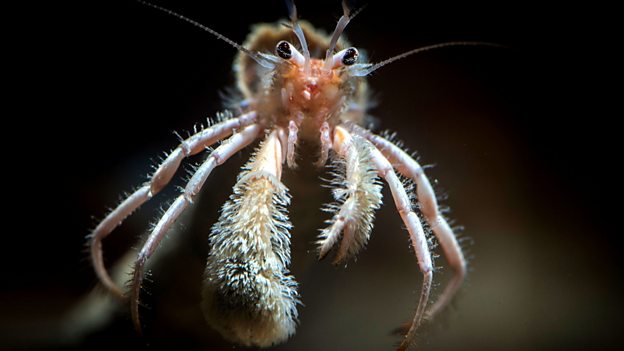 The Deep takes us on an epic journey into the unknown, a world of crushing pressure, brutal cold and utter darkness. It's the largest living space on our planet, and today, scientists think there’s more life here than anywhere else on Earth. This is our final frontier.

We discover alien worlds and bizarre creatures. Savage hordes of squid hunt in the depths. Coral gardens flourish in absolute darkness. A whale carcass generates a frenzy as slow moving, five-metre-long sharks fight for their first meal in a year.

There are fish that walk instead of swim; worms that feed on bones; shrimps that spend their lives imprisoned in a cage of crystal sponge.
As we go deeper, the sheer weight of water creates almost unendurable pressures. Yet even eight kilometres down - where the basic chemistry of life was once thought impossible - we find strange new species in the dark.

At volcanic hotspots, micro-worlds blossom into life. The creatures that live here are as alien as the worlds they inhabit. Hair-covered crabs feed on gushing plumes of hydrogen sulphide; shrimps hover on the fringes of clouds of chemicals, so hot they could melt lead...

...yet one of these geysers may even hold the secret to all life on Earth.

Pictured: A hermit crab with super sharp pincers to pick at the fleshly lobes of the giant mussels amongst which it lives. These mussels thrive on the shorelines of a brine pool, a fairy-tale world of life and death, that sits 650 metres deep in the Gulf of Mexico. Portrait of scientific specimen taken on the M/V Alucia expedition to the brine pool.

A co-production with the Open University.