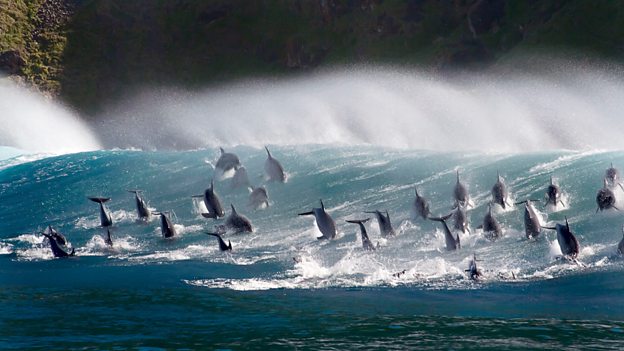 This landmark seven-part series will bring viewers face to face with unexpected new landscapes and introduce compelling contemporary stories from our ocean. Over the course of more than four years, the Blue Planet II team have mounted 125 expeditions, visited 39 countries, filmed across every ocean and spent over 6,000 hours diving underwater to bring us closer than ever before to the captivating lives of some of the most extraordinary sea creatures.

The first episode, One Ocean, takes us on a journey from the intense heat of the tropics to our planet's frozen poles. Life has spread to almost every part of the oceans, but there are many different worlds here and each presents unique challenges.

In the tropics, dolphins surf for what looks like sheer pleasure. A baby dolphin learns how to rub against a particular coral which may have medicinal properties, a tuskfish uses an anvil to open clams and giant trevally fish leap clear out of the water to snatch birds on the wing.

In temperate seas, mobula rays create an enchanting display at night, as tiny organisms light up when disturbed by their wingbeats. Two separate species - false killer whales and bottlenose dolphins, gather together to make a formidable army. And a female kobudai wrasse changes sex to challenge an older male for his harem.

But our ocean system is changing. In the Polar north, the summer sea ice has retreated by 40 percent in the last 30 years*, with profound consequences for its wildlife, including a walrus mother and pup. Ocean currents help maintain a climate favourable for life... but for how much longer?

A co-production with the Open University