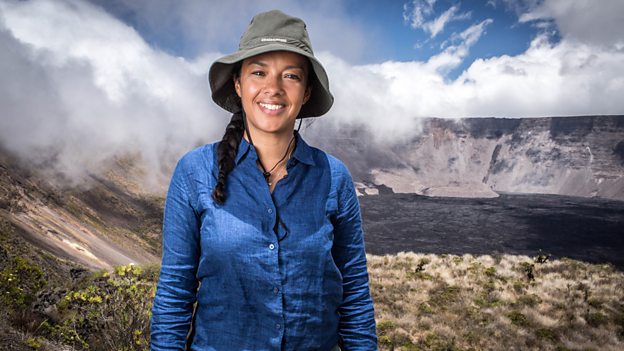 In the vastness of the Pacific lies the Galapagos, one of the greatest treasures of the natural world and a biological wonderland.

Located on the equator, it’s a spectacular archipelago where evolution has proceeded at an extraordinary pace. But these islands are changing and this tropical paradise is under threat as our climate changes faster than ever before. In a brand new three-part BBC One series, Liz Bonnin and a team of world-renowned scientists assemble for Mission Galapagos, one of the most ambitious scientific expeditions ever attempted in this remote archipelago.

In episode one, Cauldron Of Life, Liz Bonnin joins a scientific team aboard the research vessel the Alucia on an expedition across the Galapagos Archipelago.

The journey begins on the Galapagos’ west side at the youngest and most volcanically active islands in the archipelago, Isabela and Fernandina, home to a richly diverse wildlife scene.  Here, Liz and the team journey into the clouds above ‘Wolf’, the tallest volcano in the Galapagos, where they join a group of biologists hunting for the rarest of species: the elusive and bizarre pink iguana, which teeters on the edge of extinction.  But how and why did it come to live on the top of a volcano?

Back on the research vessel, Liz boards Alucia’s Triton submersible to descend a kilometre, the deepest anyone has ever dived on the Galapagos Islands, into the ocean abyss in search of a new species hiding in the darkness.  Liz also travels to one of the most remote locations in the Galapagos, Alcedo Volcano, in search of the largest population of giant tortoises. Plagued by drought in recent months, scientists are keen to find out how this prehistoric species has fared.

Finally, Liz helps out with a ground-breaking science experiment to x-ray marine iguanas that have so far stunned the scientific community with a new mutation. As with all life on these remote islands, the key to survival is adaptation.