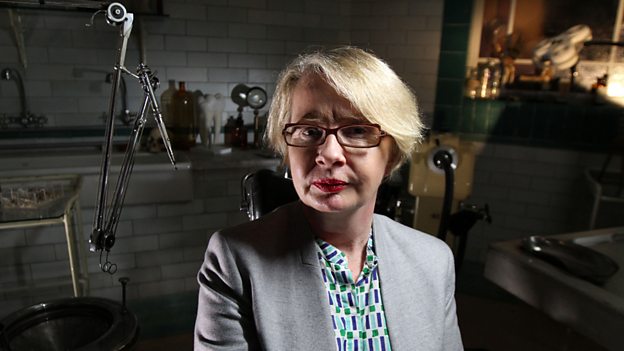 In this one-hour special, prize-winning writer, historian and author of the BBC’s ‘Eyewitness’ audiobooks, Professor Joanna Bourke, investigates how, over the past five centuries, dentistry has been transformed from a back-street horror show into a gleaming modern science.

With such a gruesome history behind the practice of dentistry, it’s no surprise that one in 10 people in Britain are still nervous about a trip to the dentist. During her journey into dentistry’s past, Professor Bourke uncovers how a trip to the barbers in Medieval England could mean much more than a haircut, reveals how a First World War General’s toothache would transform British oral surgery, how a criminal’s amazing discovery in Newgate Prison would improve the oral health of Britain, and she discovers the strange story of how the teeth of soldiers killed at Waterloo ended up in the mouths of London’s rich.

Joanna also explores how, from medieval methods of prayer and whisky, pain relief for dental patients was transformed in the Victorian era. She looks at early experiments with anaesthetic: the potentially dangerous concoctions of chemicals administered to patients in the past, and the stories of the pioneers who endeavoured to make a trip to the dentist more bearable.