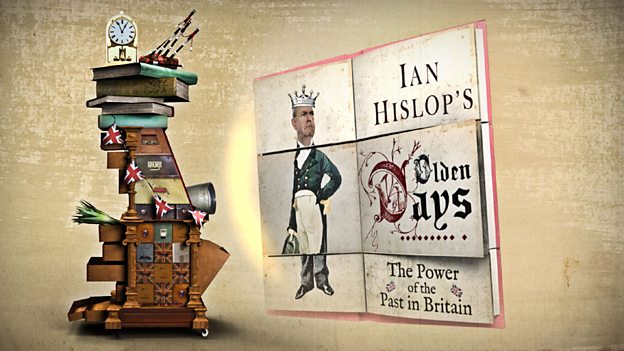 In the concluding film of his series exploring our deep-seated obsession with the past, Ian explores the Rural Olden Days - the idealized vision of the countryside celebrated by some of our greatest writers, painters and musicians over the last 160 years.

The 1851 census recorded an epochal change. Britain had become the world’s first urbanised nation. As we left our villages, what the countryside meant to us changed. It became a place of psychological escape – everything that crowded and unsanitary cities were not.

Ian finds out how a highly sentimentalised vision of the countryside emerged in the work of the Victorian watercolourist Myles Birket Foster, a forgotten artist today but one of the most influential artists of his age. Foster’s paintings eschewed steam trains and cityscapes for a rose-tinted vision of thatched cottages and apple-cheeked maids.

By the early 20th century, an agricultural depression had led to a rural exodus. There were worries that an ancient rural life was disappearing. The musician Cecil Sharp recorded and revived the folk songs and dances of what he called – without a hint of self-consciousness – the English peasantry. One of the most extraordinary fruits of Sharp’s work came during the First World War when Morris Dancing, which he’d helped revive, was used to rehabilitate war-weary troops thanks to the indomitable pint-sized dancing teacher Daisy Daking, who set up Morris Dancing classes on the Western Front!

In the years after the First World War, a house-building programme transformed much of the countryside. One of the villages which was swallowed up was Sarehole – a hamlet a few miles from Birmingham.

The writer JRR Tolkien had grown up there in the 1900s and lamented the demise of his childhood home. The battle between an idealized Shire and Mordor (a land of furnaces - Birmingham by another name) was dramatized in The Hobbit and The Lord Of The Rings.

Between the wars, the middle classes took to their cars in increasing numbers. To satisfy their rural wanderlust The Shell Guides were published. The painter John Piper wrote and illustrated a number of them. What fascinated Piper in an age of unsettling change were the reassuringly ancient features of the countryside – old tombs, crumbling manor houses and megaliths. Piper’s Shell Guides became a compendium of everything he valued about England at a time of threat.

In the 1940s, Britain turned its back on the rural olden days and looked to the future. The nation was in thrall to the Brave New World and believed that the countryside, like everything else, should be modernized. To educate farmers about agricultural innovations, the BBC created The Archers. Ian visits the Archers studio and chats to Debbie Aldridge, the actress Tamsin Greig, to find out how the programme’s appeal has changed. It may have begun life looking ahead but today it reflects many of those things – like a sense of community - which we feel we’ve lost in our anonymous urban lives.

Our rural visions have often been coloured by a sense of loss – but Ian wants to know how much this reflects the reality of life in the countryside and how much it is a projection of our personal fears and phobias. That’s a question which went to the heart of one of the great environmental poems of the late 20th century - Going Going – written in 1972 by Philip Larkin. Larkin was a lugubrious figure who liked to visit old churches and graveyards. He was self-aware and honest enough to question his own bleak assumptions about the future of the English countryside. Perhaps, he pondered, it wasn’t the death of rural England which he was lamenting, but his own.

To conclude the series, Ian reflects on the irony that some of our most cherished olden days’ landmarks were once reviled. Victorian conservationist and critic John Ruskin led a national campaign to halt the construction of the Headstone Viaduct in Monsal Dale which he claimed entirely defiled the timeless landscape. Now it’s one of the highlights of a visit to the Peak District. Might we, Ian wonders, one day make heritage attractions of wind farms and fracking sites?