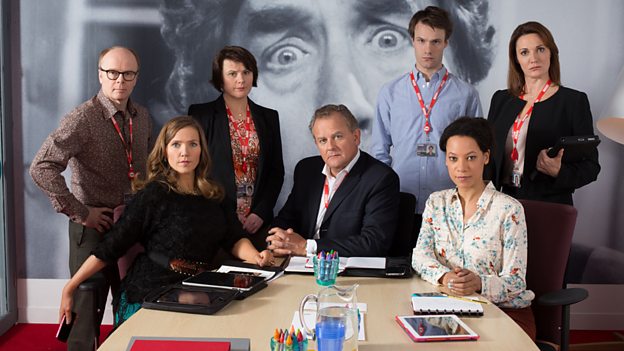 Ian Fletcher’s first challenge on arriving at New Broadcasting House, on his brand new and much-improved folding bike, is to find somewhere to sit in a building aggressively over designed around the principle of not having a desk.

Ian finds himself holding the hottest of hot potatoes when Mebyon Kernow activist Nigel Trescott complains that Cornwall and the Cornish are shamefully under-represented on the BBC.

Things get worse when BBC Spotlight South West presenter Sally Wingate goes public with her feeling that her failure to progress to a national presenting role might be part of the BBC’s institutionally anti-Cornish bias.

Ideas of how best to limit the damage lead to PR company Perfect Curve’s Siobhan Sharpe suggesting getting Sally to do something on Springwatch or some kind of Bake Off.

Meanwhile, producer Lucy Freeman is having meetings with Head of Output Anna Rampton and Entertainment Format Creative David Wilkes about a forthcoming new flagship show - Britain’s Tastiest Village - which according to David is “kind of Britain’s Got Talent meets Countryfile with a bit of The One Show thrown in just in case.”

Anna wants a progress report and there’s good news and bad news. They’ve virtually got Alan Titchmarsh on board now, but the very bad news is that it looks like they’ve lost Clare Balding - “words you never ever want to hear” - as the dates of How Big Is Your Dog, a new show she’s doing for ITV, have changed at the last minute.