Stephen Fry: Out There 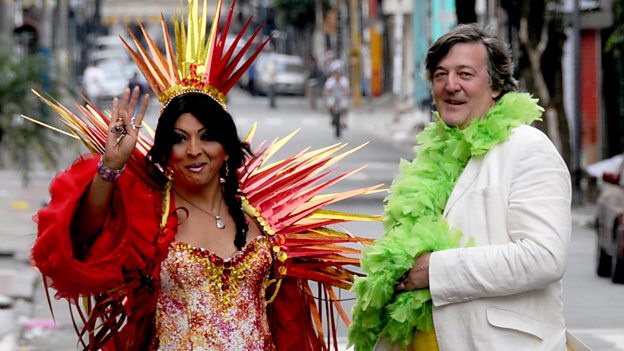 In episode two, Stephen travels to Brazil - a country that has moved from widespread discrimination to full legal equality for gay citizens in 25 years, and which is currently proposing a law to make homophobia illegal and to educate teenagers about the damage it causes.

Although home to the largest gay pride celebration in the world, the parades conceal a darker side to life in Brazil, with the shocking statistic that a gay person is murdered every 36 hours. In Rio, Stephen confronts Congressman Jair Bolsonaro, a politician who vehemently opposes plans for this new law and wants to bring an end to the advances of the gay rights movement in the country.

Stephen also travels to Russia to meet with Vitaly Milonov a politician who introduced a law banning the so-called ‘promotion’ of homosexuality to minors. Looking at the effects of this legislation, Stephen meets gay parents who risk being accused of ‘promoting’ a homosexual lifestyle to their own teenage children.

Finally, Stephen visits India, where the Victorian laws that criminalised homosexuality during British rule are being overturned. Modern India is now drawing on Hindu traditions to forge a positive way forward for its gay citizens, including its once celebrated transgender community.

Stephen Fry Out There was co-produced with the Open University.