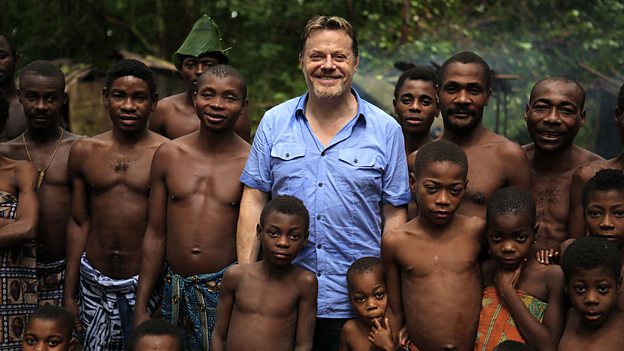 In episode two of this unique series following Eddie Izzard as he uses his own DNA as a road map to retrace his ancestral journey, Eddie learns about his Dad’s lineage.

Eddie’s genetic time travelling begins with the Bakola pygmies in Cameroon, his - and our - most distant male relatives with whom we shared an ancestor some 142,000 years ago. Eddie joins them as they go hunting, tries to copy their dance moves, and learns how the Bakola creation story tallies with recent genetic discoveries. In Dubai, Eddie discovers how the human population exploded out of Arabia, and meets an ancestral cousin who’s led a one-man population explosion of his own. In Israel, he learns about his ancestors’ romantic run-in with Neanderthals, and the surprising feature he still has in common with them.

In Vienna, Eddie meets a genetic cousin with whom he shared a Stone Age ancestor and gets to grips with Ice Age tailoring. He finds ancient paintings left by his distant ancestors in the French Pyrenees, and heads to Lower Saxony in Northern German to learn about a newly discovered and extremely rare genetic marker in his DNA. Finally Eddie heads home to try and discover when his male ancestors came to England – the final part of his male-line jigsaw – before meeting back up with his dad to fill him in on their family history.