The Bleak Old Shop Of Stuff 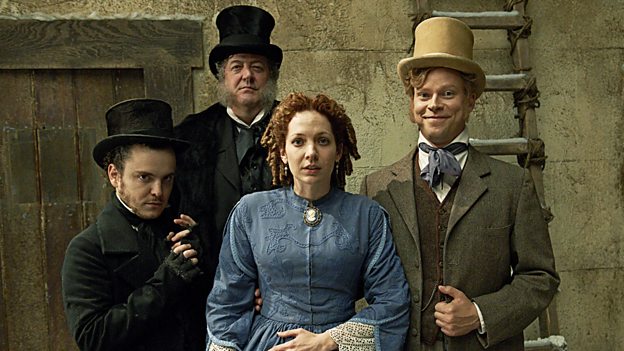 The Bleak Old Shop Of Stuff Christmas Special is the first of a new four part comedy adventure set in the Dickensian world of Jedrington Secret-Past played by Robert Webb.

Jedrington is a fine, upstanding family man and the owner of The Old Shop of Stuff, Victorian London's most successful purveyor of miscellaneous odd things.

The Christmas Special sees Jedrington and his wife Conceptiva (The IT Crowd's Katherine Parkinson) on Christmas Eve. The busy yuletide joy of Jedrington and his family is shattered when Malifax Skulkingworm (Stephen Fry), a lawyer with a flinty heart and an evil hat incarcerates Jedrington’s shop, wife and children in London’s most notorious debtors’ prison, The Skint. What is behind Skulkingworm’s sinister plan? Will Jedrington rescue his family in time for Christmas? And is there more to the name of Secret-Past than meets the eye? All will be revealed in a tale of hidden wills, brave urchins, giant clocks, misery, joy and treacle.

On the Red Button, viewers can enjoy even more comedy content from The Bleak Old Shop Of Stuff which reveals how the programme is part of a unique experiment. It is the first television programme in over 117 years to be made using traditional Victorian television making techniques. Red Button viewers will see how the relatively fearless cast and crew coped with steam cameras, on-set urchins and the occasional cholera outbreak behind the scenes.