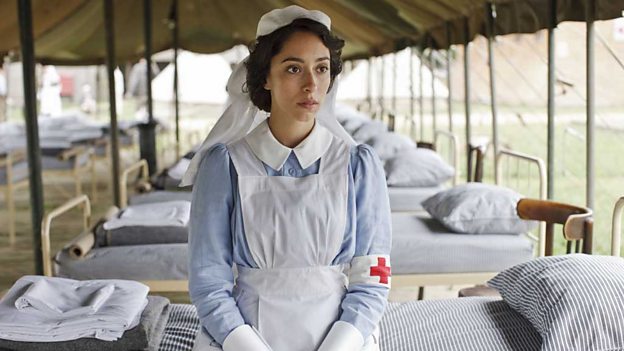 The Crimson Field (previously known as The Ark)

Sarah Phelps’ gripping drama tells the story of World War One’s front line medics – their hopes, fears, triumphs and tragedies. The tented field hospital in which they work is a frontier; between the battlefield and home front, but also between the old rules, hierarchies and a new way of thinking.

Together they embody an attitude of endurance, supreme courage and hope. Above any enmities or rivalries, they will all come to share a common bond as they experience the horror, the danger, the adrenalin, the joys and, most of all, the death-defying intoxication of simply being alive in the face of mortal danger.

The Passing-Bells is an epic drama set during World War One and told through the eyes of two very ordinary young men who enlist in a war they expect will be over within months. This moving, powerful drama, written by Tony Jordan, is told in five chronological parts spanning the years of the war from 1914 – 1918.

As the conflict unfolds, so do the boys’ incredible stories. They grow up amid the horrors of the battlefield, lose friends, and find love. Although centred primarily on the Western Front, it also explores the global nature of the conflict, featuring Gallipoli, the battle of the Somme, the Eastern Front and the arrival of American Forces.

The story looks at all aspects of the war – from the families left behind to the strategic decisions by politicians and generals that led to unimaginable bloodshed and the tragedy of the trenches. 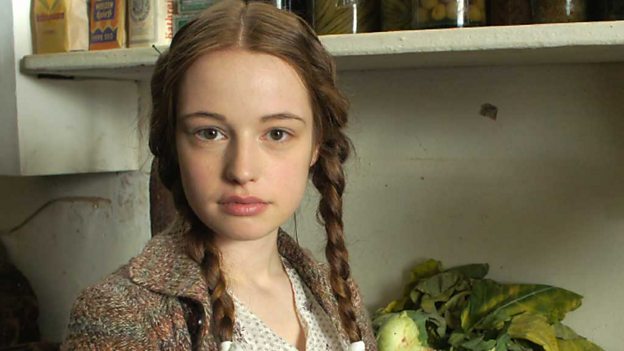 BBC Two’s Great War Diary sees 25 broadcasters from around the world come together to produce television’s global event for the centennial of World War One, bringing to light a bold new interpretation in historical documentary. Ten years in the making, this is a truly international co-production.

The series tells the story of 1914-18 solely through the eyes of those who lived it. Inspired by letters and journals from the Great War, it follows the individual stories of 13 characters whose writings are woven into one compelling story. As this was the first truly global war, the diarists are global as well. Hailing from the involved powers, and from all walks of life, they represent a cross-section of society itself. Their writings focus on what archive and historical analysis cannot reveal: personal tragedy, love, happiness, pain and grief.

Through glorious dramatic reconstruction viewers experience the greatest war mankind had ever seen; not from the perspective of what it was, but of what it was like from within. Great War Diary will unify simple human experience, unsullied by historical interpretation.

A LOOKS Film Production in Association with CTVC for BBC and 25 broadcasting partners around the world - 4x60 minutes. 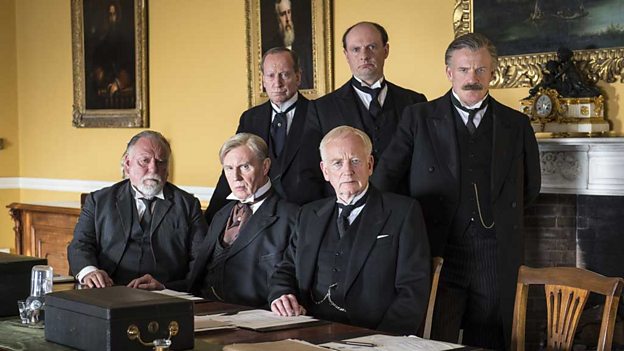 37 Days is a new, three-part factual drama which reveals the complex behind-closed-doors story of the final weeks before the outbreak of World War One.

A stellar cast, led by Ian McDiarmid (Star Wars) and Tim Pigott-Smith (Spooks), heads up this political thriller which follows the catastrophic chain of events that led from the assassination of the Archduke Franz Ferdinand on 28 June 1914, to the declaration of war between Britain and Germany on 4 August.

From the multi award-winning Hardy Pictures and written by Mark Hayhurst, this tense and gripping series set among the corridors of power in Whitehall and Berlin tracks the unfolding crisis through the eyes of leading politicians and civil servants struggling to prevent the world’s first global war.

Such a disaster did not happen by chance, and nor was it a foregone conclusion. It took considerable effort and terrific ingenuity, as well as staggering bad luck, to destroy a system that had kept the general peace in Europe for the 99 years that followed the Battle of Waterloo and the fall of Napoleon.

Our World War is a gripping factual drama series offering viewers first-hand experience of the extraordinary bravery of young soldiers fighting 100 years ago. Drawing on real stories of World War One soldiers it uses the visual techniques and imagery familiar from modern warfare – POV helmet camera footage, surveillance images and night vision – to immerse the BBC Three audience in life on the Western Front.

Each episode is closely based on first-hand testimony, interviews and memoirs that reveal often hidden and sometimes disturbing aspects of the combat experience. The first follows a single company of riflemen and machine gunners as they fight the first battle of the war against a vast German army, a battle which delivers the first four Victoria Crosses of the war.

The second episode, set against the backdrop of the Battle of the Somme, follows the extraordinary real journey of a soldier in a Pals regiment, from the moment he enlists, through his first brush with warfare, the experience of hand-tohand combat in fearsome and unexpected conditions and the challenges of no man’s land.

The series culminates in a final episode set in the last months of the war, tracking a tank commander and his crew as they pound their way across enemy territory, fighting against the odds to survive.

The films are produced by a multiple BAFTA-winning team behind programmes like Our War, The Plot To Bring Down Britain’s Planes, My Murder and the Relief Of Belsen. The directors are Bruce Goodison (Our War, My Murder, Bin Laden: Shoot To Kill) and Ben Chanan (The Plot To Bring Down Britain’s Planes, Blackout); the producer is Sue Horth (The Man Who Crossed Hitler, The Relief Of Belsen) and Executive Producer is Colin Barr (Our War, My Murder, Maxwell).

Oh, What A Lovely War

Oh, What A Lovely War! is an exclusive radio broadcast of The Theatre Royal, Stratford East’s restaging of a new version of the original production. Recorded in front of an audience at Stratford East, this production marks 50 years since Joan Littlewood’s controversial show broke new theatrical boundaries with musical satire constructed from the traditional songs of World War One.

Oh, What A Lovely War! – a musical adapted originally from a radio play – is perhaps the best-known stage play attacking the Great War. This musical comedy has always been controversial and still has enormous impact. Even in 1963, almost half a century after the war, the musical was refused a licence for a West End performance until Princess Margaret, who saw it in Stratford, remarked to the Lord Chamberlain: ‘What’s been said here tonight should have been said long ago, don’t you agree?’ It went on to be a huge stage success before going to Broadway and then being turned into a film classic by Richard Attenborough.

All Is Calm - The Christmas Truce

This drama tells the incredible story of the Christmas Truce of 1914, when enemy met enemy between the trenches and, for a time, there was genuine peace in no man’s land.

Home Front, one of BBC Radio 4’s biggest ever drama commissions, tracks the fortunes of a group of characters as they try to maintain normality while a fast-changing Britain is at war.

Seen initially through the lens of Folkestone, the Kent port through which the British Empire’s troops passed on their way to fight on the Western Front, Home Front will run for four years, with more than 25 hours of drama each year.

Starting in August 2014 and continuing until 2018, Home Front is a new daily drama telling fictional stories against the factual background of the Great War, with every episode set 100 years to the day before its broadcast, in three seasons of eight weeks each year.

Love, loss, social change, the end of innocence, and the evolution from a gung-ho nation to a war-weary nation will all unfold in Radio 4’s wartime epic.

Over four years, Tommies follows the lives of those on and behind the battlefront of World War One, in six Afternoon Dramas a year on BBC Radio 4. Meticulously researched, each drama covers a specific day and is broadcast exactly 100 years later. Tommies will begin with 7 October 2014, when the German advance was just being held 60 miles north-east of Paris.

The backbone of Tommies is the story of Mickey Bliss, a signalling sergeant in the Lahore Division of the Indian Army, and the development of signalling technology that was to prove a crucial factor in winning the war. Mickey is a very small cog in the huge machine, one that connects situations across the whole theatre of war.

Tommies will get beneath the skin and into the minds of the soldiers, exploring the conflict far beyond the familiar images of mud, blood and the trenches. Tommies explores one central theme: all humans are moths to the flame of war.