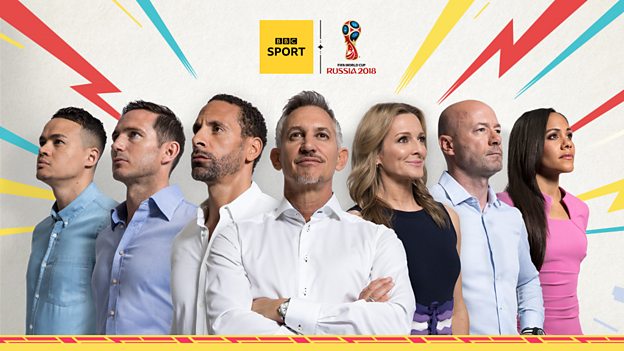 Gabby Logan follows the Three Lions across Russia as dedicated England presenter bringing news, updates and interviews from Gareth Southgate’s team camp and also from their live games as England aim to top the group.

Also joining Lineker in the studio are some of the most respected and decorated players in the international game, including; Jurgen Klinsmann, Didier Drogba and Pablo Zabaleta.

Football Focus’s Dan Walker, Match of the Day 2’s Mark Chapman and Final Score’s Jason Mohammad are in Russia as part of the BBC’s presentation team. Match of the Day favourites Kevin Kilbane and Mark Lawrenson can be heard on TV commentary duties alongside the experienced Guy Mowbray, Steve Wilson, Jonathan Pearce, Steve Bower, Simon Brotherton and Vicki Sparks, who becomes the first-ever female to commentate on a World Cup game for British TV.

A World Cup preview programme on Wednesday, June 13 (BBC One, 10.45pm) kicks off the BBC’s coverage of the eagerly anticipated tournament followed by highlights and a replay of the opening game between hosts Russia and Saudi Arabia on Thursday, June 14. Friday, June 15 sees the first of 33 games broadcast on BBC One as Egypt take on Uruguay at 1.00pm. A highlights show is available most evenings on BBC One and audiences who missed a game or want to relive the action again can watch a selected replayed game on BBC Two throughout the competition.

All BBC games are broadcast on BBC One, BBC Two or BBC Four. Highlights include a huge opening weekend of world superstars ahead of England’s opening group game:

On the eve of the Three Lions’ opening game, audiences can tune in to BBC Two on Sunday 17 June for Managing England: The Impossible Job to hear from England managers and decision makers who explain the unique role of being the manager - the pressures, prestige, glory and heartache that comes with having the hopes of the nation resting on their shoulders.