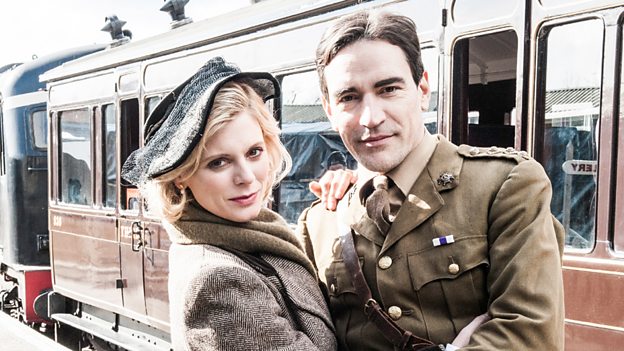 Category: BBC Two; Drama; Factual
The Wipers Times, a one-off 90-minute factual drama, is based on the true story of Captain Fred Roberts and Lieutenant Jack Pearson who in the bombed-out ruins of Ypres in 1916 discover a printing press and use it to create a satirical newspaper to raise the spirits of the soldiers.

The Wipers Times is written by Ian Hislop and Nick Newman, (A Bunch Of Amateurs, My Dad’s The Prime Minister), directed by Andy de Emmony (Love Bite, West Is West, The Bletchley Circle) and produced by David Parfitt (My Week With Marilyn, Parade’s End, Shakespeare In Love).

Made by Trademark films.

This true story is a tribute to the resilience of the human spirit in the face of overwhelming adversity. It is the tale of Captain Fred Roberts who produced a humorous newspaper called The Wipers Times from the front line of the trenches and turned the horrors of the First World War into black comedy.

It is Ypres in 1916. Roberts is a larger-than-life British officer - a former diamond prospector whose good humour has somehow survived two years of the war. As he leads a small detachment of the North Midlands Derbyshire Regiment (aka Sherwood Foresters) through the ruins of the city, he and his men make an amazing discovery in a bombed-out building – a printing press. Roberts’ sergeant admits that he used to be a printer in Civvy Street which gives Roberts an extraordinary idea. Why not use the press to produce a newspaper?

It is not the most obvious course of action in the middle of the war but Roberts sees it as a perfect opportunity to take the men’s minds off “the attentions of Messrs. Hun and Co” and decides to create not a sober journal of record but a satirical newspaper to raise the spirits of his soldiers - and himself. The Wipers Times (which is how the soldiers pronounced 'Ypres') will be filled with jokes, pastiches and spoofs which he and his sub-editor Lieutenant Jack Pearson begin to write.

We cut back and forth to the fantasy world of Roberts’ imagination, as the comic and satirical paper - poignant yet full of gallows humour - rolls off the press. Using sketches, silent movie routines and music hall numbers, the printed jokes are brought to life. The company has to run the gauntlet of hostile fire to assemble the paper and then deliver it through the trenches to the men on the front line. It is immediately popular with the troops, who respond with delight to the absurdities of the war being sent up so sharply. The lampooning of the top brass at the General Staff goes down particularly well – though not with all of Roberts’ superiors.

Some of them see the Wipers Times as an act of insubordination and subversion and there are demands for the paper to be banned. Roberts is defended by a sympathetic General, who argues that banning it would merely produce more discontent among the ranks. The Wipers Times is saved.

Incredibly it survives for the next two years despite having the original press blown up by shellfire, and the regiment being moved around the battlefields of Flanders. Against the odds and in the midst of bitter fighting, the writers’ comic intervention provides an extraordinary antidote to the horror and the mayhem around them. The poetry which floods into the paper gives a poignant expression to the deep feelings of loss.

Whilst Roberts and Pearson are decorated for bravery, their flights of comic imagination continue in The Wipers Times, as they battle through war-torn Flanders – until suddenly, it is all over. The Armistice is greeted with weary disappointment that there is no climax to hostilities.

We end with a less confident Roberts experiencing 'the horrors of peace'. Down on his luck and hoping that his wartime journalistic experience will help, he looks for a job on a newspaper. All he is offered is a position as an assistant compiler of crosswords. He refuses and returns to prospecting, taking him off to a new life in Canada where he dies in 1964, without any recognition for the extraordinary achievement of the Wipers Times.