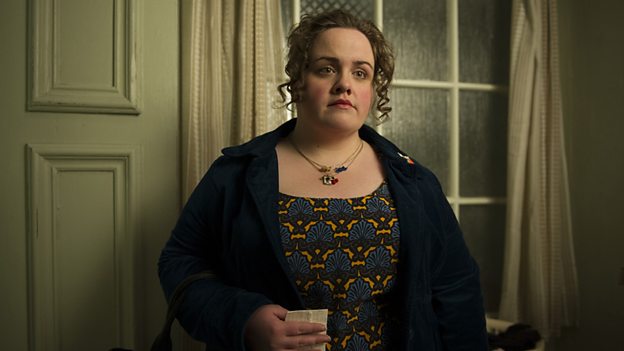 What were the challenges of playing the role of Melissa?

One challenge was telling her story even in the quieter and more private moments. There were quite a few scenes where it was just me alone in the flat so filling out those actions and telling that story was a challenge that I really enjoyed. Also mapping out her journey and filling out the gaps because you see her throughout the series as different characters at different stages of her life so it was important to me to enrich those scenes out with as much authenticity and depth as possible.

What was it like be made up to play a dead body?

Well they used a dummy corpse for the two year dead body, that would have been too much of a challenge, to slim down to corpse size in 10 weeks! I did have to be made up to be three weeks dead which was very surreal. But we had a really good make-up team on the show who worked on me for about five hours. In the end it ended up looking amazing and also terrifying at the same time. The biggest challenge with that actually was not smiling or laughing for the whole day. They made this make up on my face which would crack if you smiled, so I couldn’t move my mouth at all for the whole day! Which is a lot harder than you’d think!

If you’d asked me that at the beginning of the project I think I would have mistakenly said lonely. But having worked through the series, I don’t think she was that at all really. There are times when she’s optimistic and hopeful and brave. I think she’s had quite a tough life. Yes she can be described as shy or reserved, but the moments when she reaches out to people or does something outside of her comfort zone, those were the moments that I held on to because I think she’s actually very brave and lived quite a special and eventful life really.

What attracted you to the role and What Remains?

As soon as I read the script I really felt a connection to Melissa and I felt that the story was really intriguing and that it would be a real challenge to play her. Also, as soon as I read it I was gripped by the story, the writing was a big factor. Tony managed to create really interesting characters that suck you in straight away to the story. I’ve always wanted to work with Coky, I’ve admired her work for years and I knew that if she was part of the project than it was going to be something quite special and it turned out that it was, especially working with her.

What was it like working with the rest of the cast?

It was great. The way the filming was scheduled actually meant that we all had a good week or so in our individual flats when we were at the studio. My character’s got to be with everyone in the block of flats so it’s really nice coming in every week and entering their world and seeing each of them in their own flats that they’ve lived in for that week. All the cast were brilliant so it was a really pleasure working with such talent actors.

Do you think what happens to Melissa is reflective of society today?

I’d hope not, but clearly it could very well happen today. Especially in big cities where the pace of life is so quick nowadays. It’s often easy to just get on with things and not notice what is going on around you. It’s not that easy, if someone’s shy, to make connections with people in big cities if you live on your own. People keep their head down and carry on. Hopefully shows like What Remains will make people take stock for a moment and have a think about their own lives maybe.

I worked a lot on her timeline because I’m mainly in flashbacks. I wanted to make sure I knew where I was in her story, what kind of mindset or place she was in at those specific times. I mapped out what I thought was happening in between those bits. Also we had a chance to rehearse with Coky before we started filming so we had discussions about characters and relationships, which was really invaluable in terms of preparation.

Did you have a favourite scene?

My favourite scene would have to be the last scene she’s in. Without giving too much away, it was a challenge to film but also you get to see real strength and bravery there, and I got to do a few stunts of my own! Her last scene has to be my favourite.

How different is acting in dramas as opposed to comedy?

I used to do some sketch comedy alongside some friends of mine and I’ve been in quite a few TV comedies. There is difference there in terms of genre but I don’t think it’s very different because I think that good comedy is about storytelling and also the truth of the character and the situations. My approach to drama is the same thing, be as truthful as possible and think about the story you’re telling and what you’re trying to say. There’s quite a few similarities. Also, honouring the writing in any style is important. I know how tough that can be and it’s also a challenge to make that as believable as possible.

What can audiences look forward to with What Remains?

They can expect a gripping story. There’s intriguing and full characters that have got really interesting relationships. It’s also quite scary and tense as well, which is always a treat. I think the relationships will definitely interest them as well as the ‘who did it’ aspect. It’s more than your average whodunit.