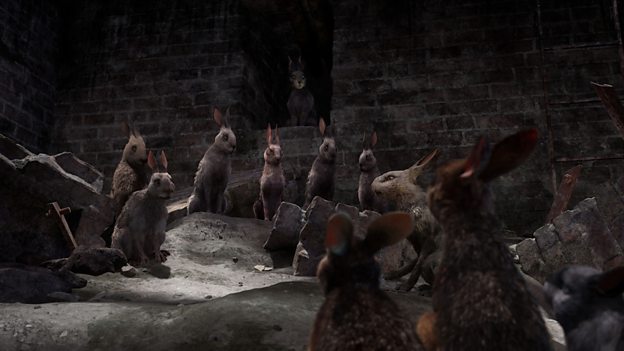 It's a really good piece of storytelling, told by some good storytellers. That's enough for me.Freddie Fox

What was it that attracted you to the project?
I remember what a popular story Watership Down was when I was young, so the title had a strong appeal. And then you add the people who were already cast... and the scale and largesse the director Noam brings to any project. I felt very lucky to be part of such a distinguished gang of artists. It was something I couldn't turn down.

Tell us about Holly, your character.
I think he is a good guy, under extreme circumstances. He is very officious and organised, and determined to do what he feels is the right thing for the greater good. This makes him, I think, morally very good, albeit blinded by that kind of stringent morality and old-school form. I see him as a soldier. A young soldier with an older head on his shoulders, who is determined to do everything right - but he can't really see the wood for the trees.

Was there a particularly memorable scene for you to play, or a moment that you're especially looking forward to seeing on screen?
Two scenes in particular really spring to mind - one is the scene where Holly comes face to face with Sir Ben Kingsley's character, Captain Woundwort. He sees what a fool he has been and suddenly needs to make amends for that - and chooses to be brave in the face of adversity. It's a beautifully written scene, it's very moving. The early designs for it were epic and awesome - so I'm intrigued to see what they do with that. There's also a lovely scene that Holly has with Anne-Marie Duff's character, Hyzenthlay, who of course he is secretly in love with but can't really bring himself to say it because he's quite old fashioned in that way. I thought that was beautifully written. I did one of my first ever jobs in a play with Anne-Marie, so I thought it was quite amusing that we turned out to be lovers nearly ten years later.

You're also the voice of Dennis (The Menace)... how does voice work compare to regular on screen acting?
It's very satisfying on a basic level, in that you can come to the studio and have a lot of fun without fear of getting it too wrong because you've got the words written down in front of you. It allows you to be completely inventive and irreverent and make bold choices, because you have that luxury of going back over it and moulding it. You also get to work some amazing artists, the likes of which you don't really get to do on straight film.

I also like seeing what an amazing and all-encompassing medium it is - you can sit with a voice director who will be working with you and then you can go into the animation house and watch them composing complete characters on the strength of your voice and script from a piece of virtual clay. That is so impressive. In that way, the collaborative element of animation and how long it takes to achieve that collaboration is really special and unique. And because it has taken so long to create, usually it means that a lot of thought has gone into it at every stage of development, which means that more often than not the pieces are really good. It's less haphazard than regular film or television work.

Sometimes they put a camera, as they did in Watership Down, in the studio with you - so the animators can see the actor's expressions as they're acting it. In this way they can see what the truth of the moment is for that character and they can try to use that as a base to ‘mould the clay’.

What makes this story relevant to an audience in 2018?
It's just a bloody great story, filled with rich, archetypal characters which provides entertainment, whether you are eight or eighty. I think that gives it enough relevance to make it worth watching and worth doing.

Why should BBC One viewers watch Watership Down this Christmas?
It's a wonderful story, told beautifully with wonderful actors. It works for all the family. It gets your heart racing and I hope it will leave people enthralled by its storytelling. It's a really good piece of storytelling, told by some good storytellers. That's enough for me.

Have you ever had a pet rabbit yourself?
Yes, I did once! She was called Rebecca. She was my sister's rabbit, although I was made to feel like we shared her. Although I was at an age where I probably would have done more harm than good to it in the long run. I did less of the feeding and more of the stroking. She was lovely.