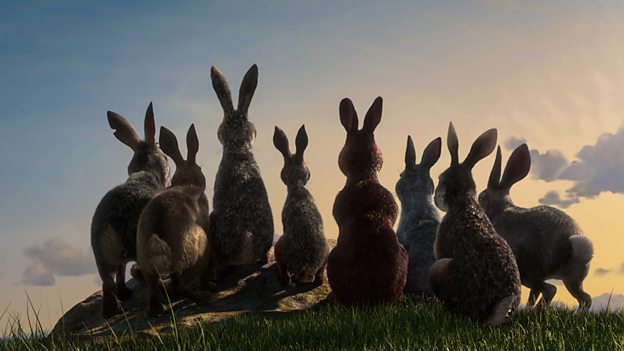 Category: BBC One; Drama
Airing this Christmas as two special feature-length episodes, BBC One’s Watership Down uses Richard Adams’ bestselling novel as its source to bring an innovative interpretation to the much loved classic.

Adapted for the screen by Tom Bidwell and directed by Noam Murro, this tale of adventure, courage and survival follows a band of rabbits as they flee the certain destruction of their home. Led by, stout-hearted brothers Hazel and Fiver, voiced by James McAvoy and Nicholas Hoult, the rabbits journey forth from their native Sandleford Warren through the harrowing trials posed by predators and adversaries, towards the hope of a better life.

Executive producers are Rory Aitken, Josh Varney, Ben Pugh and Eleanor Moran for 42; Noam Murro for Biscuit Entertainment; Martin Rosen; and Ben Irving for BBC One. The series is produced and developed by 42 and Biscuit Entertainment, was commissioned by the BBC, and is a co-production between BBC One and Netflix. The mini-series is co-directed by Alan Short and Seamus Malone and produced by Georgia Dussaud and Cecil Kramer.

Watership Down airs on BBC One at 7pm on Saturday 22 December, and 7.20pm on Sunday 23 December.

An introduction to Watership Down 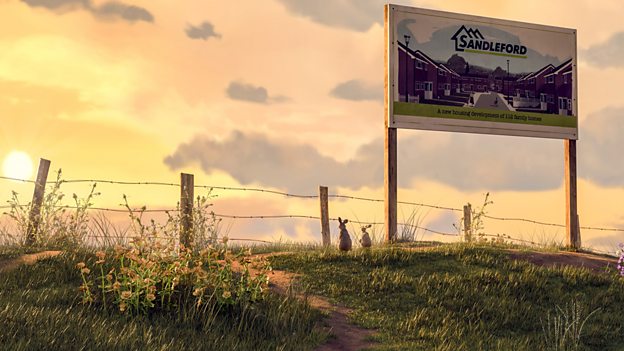 Watership Down is a book we have all loved, like so many readers, since childhood, and when director Noam Murro approached us with the rights, we jumped at the opportunity to adapt the story for television. The four episode structure gave us the chance to delve deep into this rich and complex novel, and really get to know the timeless characters that Richard Adams created, in a way that wouldn’t be possible with the time restrictions of a movie.

Whilst this adaptation never shies away from the darkness, including the timely themes around environmental destruction, the fact that you are given the time to invest deeply in the characters makes the moments of joy and hope all the more uplifting. It’s one of those rare stories which can be enjoyed by adults and (older) children together, and interpreted on many levels, or ultimately, it’s “just a story about rabbits” as Richard Adams himself said.

Richard was supportive of the project, meeting screenwriter Tom Bidwell in person, and even recording for us the correct pronunciation of the lapine language that is such a special part of the book. His two daughters have also been part of the creative process, consulting throughout the production. The flora and fauna of the real Watership Down were an integral part of the DNA of the novel and were deeply important to Richard; from Juliet and Ros’s memories of specific plants, insects and birds (which were abundant then but many of which have disappeared since the book was written) we were able to include them in the animation.

We felt that the female characters could be brought more to the fore for a modern audience, and Richard was sympathetic to this. For instance, we changed the sex of Strawberry - played so brilliantly by Olivia Colman - and increased Clover’s story to be a more significant part of the narrative. We decided to cast Rosamund Pike as the Black Rabbit of Inle, who takes rabbits to the afterlife when it’s their time, a character whose gender is never specified in the book.

The casting process was huge fun: unlike most TV casting, where you’re unlikely to secure your first choice, the actors we approached were immediately keen to be a part of the project, with James McAvoy first in as Hazel.

When it came to the music, as well as the majestic orchestral score, we wanted both an iconic theme song and also a song specifically composed for the does. We were lucky enough to have Emeli Sandé come to the project, and write and perform the protest song the does sing as they fight for their freedom in Efrafra. Sam Smith read the novel for the first time, and immediately carved out time from his punishing tour schedule to write and record series theme Fire On Fire.

We’re so excited to share the show with the BBC One audience for Christmas 2018.