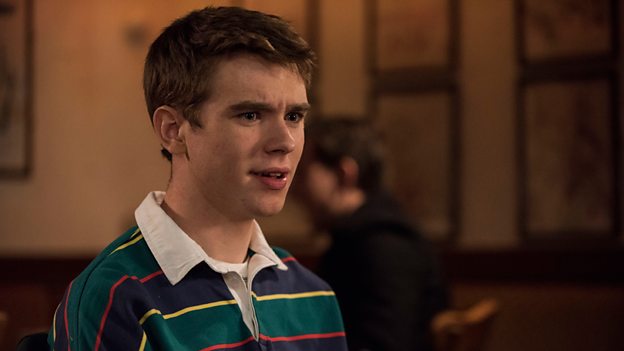 I’m only young but I know that a job like this, in which I feel so confident and where I get to have a laugh every day is a rare thing so I’m doing my best to savour every moment.Oscar Morgan

How would you describe Danny?
Danny Humphries is the younger and quieter sibling. He’s kind, courteous and very studious. A good lad really - although quite weak of will. Submissive and bashful, he’ll probably do anything Warren tells him to. He hasn’t figured out how to say no.

What's his relationship with Warren like?
Warren is all Danny has known for a father figure and I think he does look up to him a bit. He always seems to be Warren’s first port of call, often becoming his unwitting sidekick. He’s Warren’s enabler. While he appears reluctant, he definitely enjoys the attention.

How would you describe Danny's relationship with the rest of his on screen family?
Being the youngest, I feel that Danny is used to not being heard. Although he is undoubtedly Warren’s favourite; While Charlie is regularly reminded of his tit-ishness, people soften for Danny. Warren certainly holds a soft spot for him. His quiet nature endears his family to him.

What appealed to you about working on the show?
I loved working on the show. Mainly though, it’s so good not having to worry about being funny yourself because the script will do it for you. Jimmy and Paul the writers are non-stop geniuses.

I’m only young but I know that a job like this, in which I feel so confident and where I get to have a laugh every day is a rare thing so I’m doing my best to savour every moment.

What was it like working with Martin Clunes?
It was lovely working with Martin. He’s very accommodating and always let me know when I was doing good, he made me feel very comfortable and welcome. He’s just a great energy to have on set. When I was little I used to listen to this Fungus the Bogeyman audiobook to go to sleep which was read by him so it’s very strange to be acting alongside that voice. I get bogeyman flashbacks!

Any funny stories from filming?
I couldn’t possibly pick out one story but I remember finding it hilarious watching Martin scoot over to set on a big grown up scooter. So graceful.