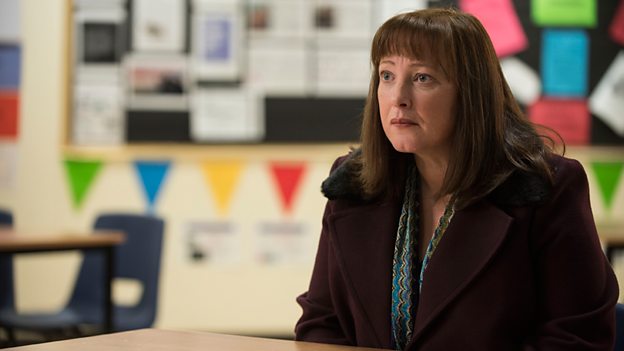 Brilliantly funny dialogue is so difficult to deliver when you are all in a constant state of trying not to laugh.Lisa Millett

Can you tell us a little bit about the show?
Warren, Anne and her two sons have relocated back to Preston due to Anne’s dad falling ill. They’re not married, a fact which he is quick to remind Anne of if it gets him out of taking responsibility. Warren is a fish out of water 'up North'. He is a driving instructor, a job his temperament is not suited to. For Warren the world is against him. He is the architect of his own chaos.

Describe your character Anne
Anne is quirky, mildly bonkers and has a wonderful ability to go off on a tangent mid-sentence. She can have five different trains of thought in one conversation, which can lead to one of her eccentric stories which amuse and frustrate those around her in equal measure. She wears her heart on her sleeve, is easily distracted and often has a literal interpretation of things. There is a charming naivety and innocence about her, traits which stand her in good stead where life with Warren is concerned. She often sets Warren up for disaster unwittingly. The boys in her life, Warren and her sons Charlie and Danny are her world. Anne values fairness and is led by her emotional response to a situation.

Does she always see the good in Warren?
Anne will always see the good in Warren, however Anne wears the trousers more often in the relationship than Warren would care to admit. She is an eternal optimist when it comes to Warren. Pragmatic, often cajoling but when rattled, usually by her own irrational neuroses, she can be as single minded as Warren in her approach and she panics. Warren’s glass is half empty; Anne’s is half full, so together they make a whole. They couldn’t survive the stresses and strains of modern life without each other. She loves Warren unreservedly because for one thing he loves and accepts her as she is. They absolutely need each other and love each other against all odds. Nobody else would put up with either of them!

What was it like working alongside Martin Clunes?
I hadn’t worked with Martin before but like the vast majority of people I’d had been a fan of his work. He is one of this country’s comedy legends a proper national treasure. He was everything I’d hoped he’d be and more, on screen and off. He is a delight to work with. Martin is a generous actor who is equally interested in what you are doing, a team player who laughs out loud at another actor’s performance. As an actor he is achingly funny, generous, clever and kind - as a human being he is achingly funny, generous, clever and kind. What more could you want? Apart from fresh eggs from his own hens on a weekly basis - oh wait, I got those too!

What appealed to you about the show?
It has to start with writing. The scripts are truly brilliant. The appeal to play Anne was huge. Jimmy and Paul write her to perfection. At first read I loved it. So often with scripts you read, re-read a couple of times, make notes then mind wrangle “what can I do with this?”, “how can I make it funny?”. With writing, characters and situations as good as this it was already there. Anne has such a strong presence, her own narrative and isn’t just the female foil as one so often sees in comedy. She is not there as the 'straight woman'. I adore her quirkiness. I’m sent many comedy scripts where the female characters are there primarily to support the male characters, devoid of their own complexities, one dimensional and ultimately not funny in their own right so with this I can honestly say had it not gone my way, I’d have been devastated. Then throw the fact that it was to play opposite Clunesy in the mix… er… no brainer. Also it has to be said that Hat Trick are synonymous with quality. Anything they are at the helm of is going to be a cut above.

Any funny stories from filming?
Every day was a laugh. We all properly get on. The first week of filming happened with the family, eight of us stuck in the 'big car' as Anne calls it, on the back of a low loader. There is something dangerous about eight actors who can only be communicated with via walkie talkie. Barry our first AD would be screaming action, whilst we were all chatting away, oblivious to the task in hand. There was a lot of corpsing that week. Hysteria sets in. Brilliantly funny dialogue is so difficult to deliver when you are all in a constant state of trying not to laugh. It was a stroke of genius in the scheduling because from day one we were a family.

We were filming a scene in a residential street. Without giving the plot away, something happens which has unfortunate consequences. A young lad not realising we were a film crew challenged Martin, quite passionately about what was going on truly believing he was witnessing a real event!