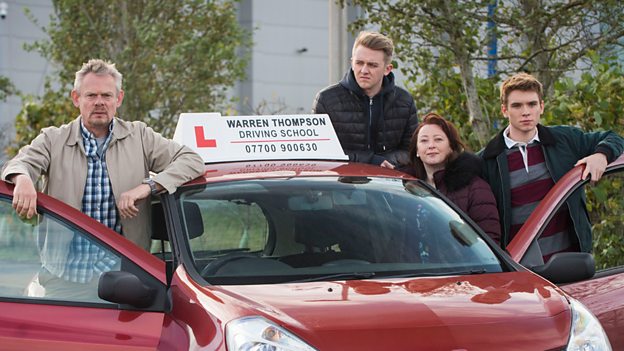 Category: BBC One; Comedy
Created and written by Jimmy Donny Cosgrove and Paul McKenna, this original six part comedy series from Hat Trick Productions centres around the life of Warren Thompson (Martin Clunes), a pedantic driving instructor who thinks the world is against him.

Warren suddenly finds himself in his mid-fifties, forced to move from the south up to Preston when his partner Anne’s (Lisa Millett) father falls ill.

Warren’s living in an area he doesn’t like, doing a job he’s not emotionally cut out for and looking after two teenage stepsons, Charlie (Tim Preston) and Danny (Oscar Morgan) he never wanted.

Never blessed with any sort of patience or a paternal instinct, Warren just wants an easy life. He’s happy with a clean house, a neat garden, and a nice cup of tea. But thanks to his naturally difficult personality, Warren is constantly finding himself in sticky situations. He’s always making life hard for himself and often on the verge of losing it. There are no happy endings for Warren as he grapples against the problems and misunderstandings of his own making.