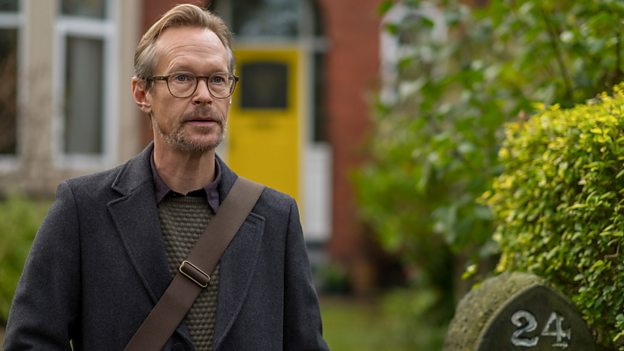 There are no clear heroes and villains; they are all people with their own desires, motivations and longings.Steven Mackintosh

The big draw for me in the first place was the writing. There is such clarity in Nick’s writing that you feel you know what the scene’s about before going onto the set. It was so instantly appealing - it was insightful and intelligent, but also witty in a very unusual way. I found that Nick writes with such affection for all of his characters, with all of their flaws and idiosyncrasies, which is incredibly appealing. His writing seems to represent characters in a way that life does. There are no clear heroes and villains; they are all people with their own desires, motivations and longings. They are all muddling through everyday life. It’s quite rare to see a story like that. It’s not a story driven by a thriller thread - we’re not trying to catch anyone or anything like that at the heart of it. It’s about relationships, family, love, sex - it’s the stuff of life. With all those subjects in mind, it sounds like it could be rather weighty - but actually it’s just so funny. The humour is brilliant. Alan is almost unintentionally funny - sometimes he doesn’t know he is funny, but he is. Alan speaks in these broken sentences, which I can relate to. I had been looking to explore more of my humorous side in my work and this does that so beautifully. And of course when I heard Toni Collette was involved I thought, well, what’s not to like here!

How was working with Toni Collette?

Toni is extraordinary. We were all enthusiastic because the writing was so great, but Toni’s energy and enthusiasm for work made every day so pleasurable. Because we were playing husband and wife, it was such a pleasure discovering each scene together. Even though Nick’s words are very specific even down to the grammar, Toni is so absolutely present in the room. She’s not just repeating things, she’s always looking to connect. She’s so amazing at that and it makes it such a pleasure to be on the set with her. In the first scene of the first day I had this connection with Toni and I remember coming away from it thinking, well if it’s like that everyday then this is going to be the best job ever. Every one of the cast who came in, even to do a day or a single scene, was so well cast. It made each day a surprise. It was quite exceptional in that way.

How was filming in Manchester? How was the weather?

It was the polar opposite to the summer we’ve had. It was during ‘the Beast from the East’, so it was as harsh as it gets. Fortunately we weren’t outside every day; there were a lot of interior shots as we are in Joy and Alan’s family home a lot. In terms of the physicality of the scenes, it wasn’t too bad. When you made it through the blizzard to work, there was lovely, glowy warmth in general.  I’ve shot in Manchester several times over the years so I’m very fond of it. It was nice to visit some of the old haunts and discover some new ones. The crews are amazing - they are incredibly efficient. They have such a high standard of work. It’s a great town to be in, it’s so compact but culturally so diverse. I had a lot of fun.

Did you have any reservations of doing a drama with this topic?

No. No reservations. I knew there were some intimate scenes in this. I knew an element of this was the sexual element. But it was only one element of this story, which is ultimately about relationships and love and people who are on a quest for very similar things in life. The [sex] scenes are funny too in their own way. They are not earnestly trying to represent sex in a generic, soft-focus way. It presents it in a way that feels real, much like the people are, with all of their clumsiness and idiosyncrasies. It shows how the oddest encounter can turn into a sexual moment. Because of Nick’s writing, it seemed instantly inviting.

Have you seen any of Nick’s work before?

No, I’ve seen nothing. I had heard of his play Constellations, which I heard was completely brilliant and I remember it being on at the theatre - but I missed it. Now knowing Nick’s work, I am really sorry that I missed it because I’m now his biggest fan and of course the next time he has a play on, I will be the first there to go and to see it. I Toni is so fantastically passionate about Nick’s writing. I know it was originally a one act play - the germ of an idea was in that and it’s been expanded on. I would be intrigued to see what that was like and to see how it’s made its journey into this series.