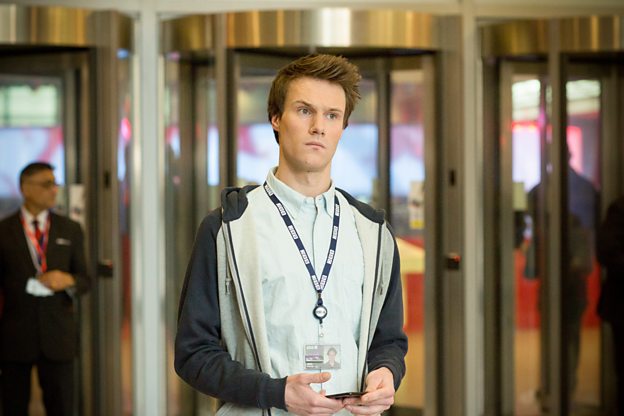 At first glance it can seem like someone is just saying ‘cool’ and ‘yeah’ in the most confusing way you could ever hope to learn.Hugh Skinner

Can you give us an overview of the new series?

This series builds up to the launch of BBC Me - an incredible new online platform - and everything orbits around that I guess. Will’s programme idea, On Your Bike, has been piquing interest again and Izzy in an attempt to keep him involved gives him a job of doing these celebrity pieces to camera. Will has the job of stopping celebrities in the reception of New Broadcasting House and asking them to say ‘me’ into a camera…

You’ve played this character for three series now, does it take a while to get into character or do you feel like Will again as soon as you’re back on set?

To be honest I just get really, really scared and nervous because I was so excited to get this job the first time around and had such a good time doing it. And the cast are obviously incredible and John Morton who writes and directs it is amazing so I just get nervous. I think it takes me a while to settle in and not be nervous.

John Morton is known for his meticulous dialogue, how did you find that?

It’s really hard to learn but it is all written very specifically with intention. So at first glance it can seem like someone is just saying ‘cool’ and ‘yeah’ in the most confusing way you could ever hope to learn. But there is very definitely a specific logic to it and it all makes sense.

The hard thing is the idea is to learn it so you don’t think about it and then what’s actually going on is underneath. I feel lots of the show is people saying one thing when they mean another.

Your character is very popular character with viewers. Why do you think that is and do you enjoy playing the part of Will?

I love playing him. If people like him I think it’s because he is so nice, he is so good and he’s almost completely useless but he tries so hard. He just means so well, he is incredibly stupid but he tries hard.

Do you have a favourite scene?

I have loved doing scenes with the characters I haven’t got to do scenes with before, so in the new series I get to scenes with Rufus Jones (who plays David Wilkes, Commissioning Editor Primetime Factuality) and David Westhead (who plays Neil Read, Current Head of News and Current Affairs) which is exciting.

What’s the most W1A thing that has happened on set?

Trying to go through doors and being told to sit back down when you have been walking through them all morning! On the first series the best thing was when we went to get lunch and security would ask to see our passes and obviously we all had prop passes on that didn’t work and they wouldn’t let us go anywhere as the security team thought we were imposters!

Why do you think W1A is so popular?

I think John (Morton) has an amazing way of writing characters and I think he observes people brilliantly. I also think although it’s about the BBC it relates to any work situation but why people want to watch it after a day in the office I don’t know!