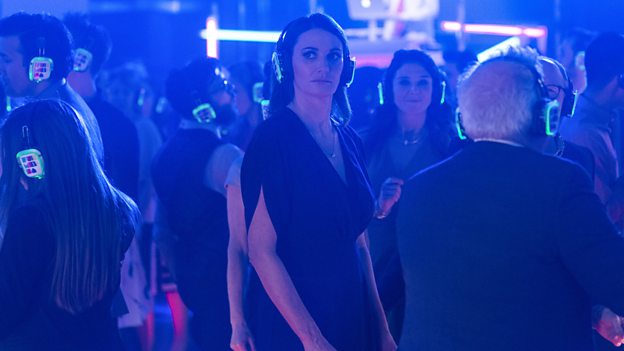 It’s an incredible job to do, I will cry when filming ends!Sarah Parish

What can you tell us about your character and this series of W1A?

My character, Anna Rampton, is taking up her new role as Director of Better and still has designs on Ian Fletcher, very much so now. She is still bluffing her way through meetings and panic-attacking her way through situations, getting out of doing anything of any particular value.

You’ve played this character for three series now, does it take a while to get into character or do you get straight back into Anna again as soon as you’re back on set?

It’s funny, I felt more Anna on this series than the other two. I think it just took a long time for me to find her because she doesn’t say much; it’s quite difficult because you base a character around what you say and what people say to you. It was quite a challenge finding her, and making her real to an extent where she is almost believable or where people recognise her.

What’s going on with the love triangle (between Ian Fletcher, Anna Rampton and Lucy Freeman)?

In Anna’s head she just presumes that Ian will end up marrying her, you know why wouldn’t he - she is very successful and has got lots of money! However she can see there is a slight threat there with Lucy, therefore Anna’s inability to play it cool gets more and more prevalent as the series goes on.

Anna has also bought herself a Brompton as she thinks that will make her more appealing to Ian. She has no idea how to use it but she has bought the top-of-the-range most expensive one; she has no interest in it at all.

John (Morton) is known for his meticulous dialogue, how did you find that?

Filming has been very difficult this series as it is every series. But it is such a joy to have such a brilliant writer, so it doesn’t matter how difficult it is to do those huge long scenes in the offices that take forever! We all know each other so well now that if we mess up it doesn’t matter. We have got the rhythm of those characters now which has become so natural to all of us. It’s an incredible job to do, I will cry when filming ends!

Is there anyone you particularly enjoy playing opposite or watching them work?

I love them all - most of my scenes are with Hugh Bonneville and I love his character, and I just think he is so indefinably loveable. I can’t keep a straight face, can’t even look at Rufus’s face without laughing! And when I watch Jessica I am so in awe of her comic timing, and to make everything sound brilliantly funny.

Why is W1A so popular?

I think it resonates with anyone that works in a corporation, anyone who has had to sit in on meetings that go on and on and never really conclude recognise it. I think the characters are very well-defined and well-written and people recognise them, people always come up to me in the street and say “I’ve met your character; you’re the really intimidating one that never says anything!”

What’s the most W1A thing that has happened on set?

Being ‘horizontally evacuated’ where you just walk to a different area on the same floor when a fire alarm goes off!

What’s it like working in the BBC’s New Broadcasting House?

It’s quite stressful as we don’t have a lot of space or time, and it’s a working environment. I think the first time we were here people were excited, the second they were a bit peed off and now they’re just like please get out!