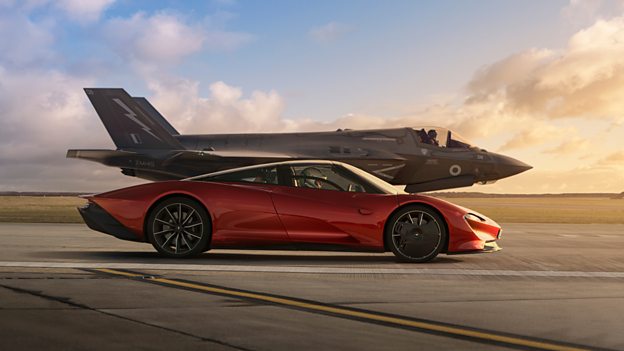 I cannot explain how tough it is when you find yourself up a mountain in Nepal and a car has broken down (yet again) and the light is going.Clare Pizey

What has been your highlight from this series?

I’m sorry but there’s no one highlight for me. There are many memorable moments. For sheer ambition plus absolute admiration for Fred, I’d have to say Car Bungee. For absolute joy, watching Chris Harris driving in a T Rex costume being peppered with golf balls, whilst my Co-Executive Producer, Alex Renton was on the floor he was laughing so much takes some beating. For pure comedy, Paddy’s choice of car in Peru and what happens to it will stay with me for ever. Seeing the three of them together in Paddy’s rival to the new Land Rover Defender will make me smile for a long time to come. And that’s before I’ve even got to Chris Harris in the new McLaren Speedtail versus the RAF’s new fighter jet!

How has the relationship between the presenters changed going into this series?

They know each other better. So it’s just better. They genuinely like one another - but equally they now know exactly how to wind each other up. And there’s so much laughter whilst we’re filming. You can’t fake that and I think the viewers can tell.

Why does Top Gear remain so popular all over the world?

That’s for the viewers to say not me really. But I think the scale and ambition of our films mean that nothing is off limits. We can work with the very best of the best and go to the most extraordinary places around the world. And really laugh whilst we’re doing it. Top Gear needs to feel like three mates going on an adventure. And I think we’re there now.

What aspect of Top Gear do you enjoy the most?

I always say that making Top Gear is a bit like childbirth. I cannot explain how tough it is when you find yourself up a mountain in Nepal and a car has broken down (yet again) and the light is going. But when you see it all coming together in the edit, it’s worth it every time. So I think seeing a finished film is the best bit. You forget all the pain you went through to get it there!