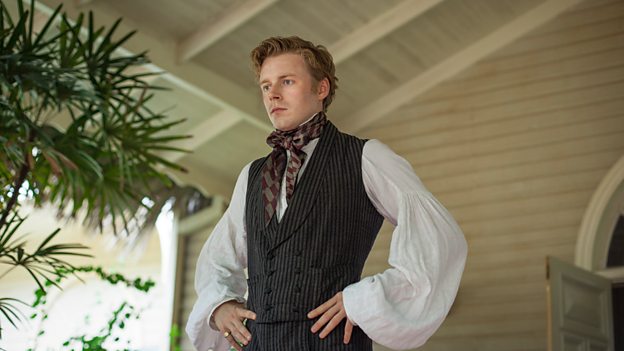 It’s one of the best written roles that I’ve ever been lucky enough to play. One hundred percent. Andrea Levy created three people who can be complete contradictions - they are complete human beingsJack Lowden

How would you describe The Long Song?
The Long Song is compelling, important and the way it’s told in this version has got some swagger and attitude that I think people won’t expect.

The Long Song is a three-part drama based on a book adaptation about a very important period of time in Jamaica - the end of the slave trade. It focuses on July, but becomes this bizarre love triangle between July, Robert (my character) and Caroline.

Tell us about your character
Robert appears in Jamaica after abolition and emancipation. In the story he brings the news of abolition having happened. He is brought in as the new overseer of the plantation during this period, where the plantation owners were compensated for the abolition of slavery with money. He is there to bring this news as a big change and as a promoter of equality. But he learns very quickly that he is also there to run a business and his values and beliefs run up and hit very hard into the fact that he is essentially a business owner - and the business needs to survive through this big change. It’s this struggle that Robert is involved in, with the backdrop of falling in love as soon as his arrives. It becomes very, very messy...

He is somebody that has quite obviously been under the thumb of a very strict father for quite some time - a god-fearing father. He suddenly finds himself on an island, as a young man - a virgin, and meets this woman, who he knows he shouldn’t fall in love with. His self-doubt is quite evident throughout the whole series. But when things start going wrong for him on the plantation, you start to see a man begin to crumble. He turned up with all the goodwill in the world, but is obviously severely damaged as a person because of how strict his father was - and the weight of the expectations and responsibility crushes him.

Why did you want to play this role?
It’s one of the best written roles that I’ve ever been lucky enough to play. One hundred percent, it’s one of the best written roles. It’s a complete honour to be given a part like that, before we even get into the backdrop and the subject matter. Andrea Levy really created three people who can be complete contradictions - I think you find yourself doubting, hating, loving them. They are complete human beings.

How do you think audiences will take to it?
I think it will be a rollercoaster for people viewing it. I think it will ask a lot of people’s preconceptions of certain things. I think there will be welcome surprises to people, how certain things are portrayed in the piece. That’s the great thing about it. It’s being told in a fresh way. People band that phrase about a lot when they’re talking about films and TV, that it’s fresh - but this genuinely is. It genuinely is. It’s a subject matter that most people know about, but it’s not been told enough. For it to be told the way that this has been told, genuinely is fresh. It has a lot of swagger, which is great.

Did you do anything to prepare for the role?
Mahalia gave me a book that is a verbatim diary of a plantation owner in that time, from the moment he leaves England to when he turns up in Jamaica. It’s quite remarkable what he wrote in that diary. The view that he had of himself as a saviour of these people is remarkable. The ignorance of these people is breathtaking, but yet they seem to have genuine love for the people that he essentially owns and believes that they have love for him. There are quite a few entries in the diary where they are offered freedom or certain things and they’d rather stay with him because, in his words, "they love him so much". That’s what I read, because my character Robert turns up with an idealism that thought was hopeful - but in reality it’s really damaging.

What have you learned about this time?
The key thing that surprised me about this time that I didn’t really know before, was that after the abolition of slavery and the emancipation was the fact that compensation - actual money - was paid to the plantation owners by the British crown. Not a penny was given to the workers. Nothing. The corner that they were then backed into, where they had their freedom but had been brought against their will to this island, and they had nowhere else to go but these slave villages where they had been put. As Robert reveals in the piece, they can’t stay in their homes unless they pay him rent - and they cannot pay rent unless they work on the plantation and they pay them. So not a lot really changed for the slaves. Nothing changed apart from, what I can only imagine, was the severe frustration at being told that you’re free and then working out very, very quickly that you ain’t.

I never knew about that. It’s taught in very broad brushstrokes. You’re told it was horrific, they were slaves - and then in a click emancipation happened and everything was fantastic. That’s what I learned. But it became worse. You were working for wages that you were then instantly handing back to the same person. I never knew about that and I am so glad that I know now.

What’s been your most memorable scene or moment working on this?
The scene with Tamara when Robert and July first physically touch - this was one of the few moments that I’ve ever had in character when I felt completely in the moment. Actors like to say that a lot - but we did. So much of this was encouraged by Mahalia.