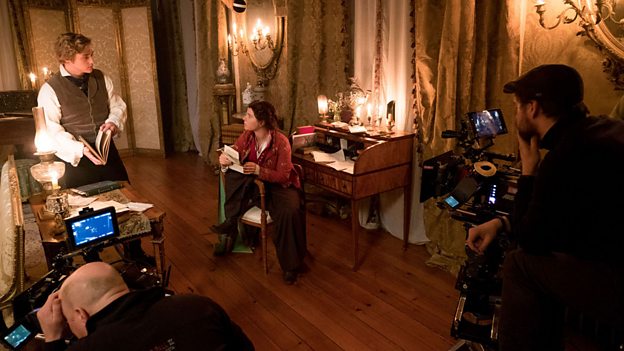 It’s an edge of your seat psychological thriller but uniquely contemporary and current in its themes, including the challenges women are subject to and the compromises they are forced to make to survive in oppressive patriarchal societies.Carl Tibbetts

How did you get involved in The Woman In White?

I knew it as one of the first examples of the mystery novel. Its popularity has endured and it felt like when the chance came up to tell this story now in these times I couldn’t turn it down.

What are the key stages in your role as a director?

Not every director is the same but once people buy into my take on the story it’s all about sitting down with the writer and combing the script and plugging into everything that is in their head. Then it’s beginning to visualise the words on the page and how that process changes the script. Then it’s all about cast - who are these characters? It was important the three leads remained young and that helped set a tone. Then it’s finding my director of photography and for this, it was the very talented Eben Bolter and it worked brilliantly. Then costume, hair, make up, production and post-production, editing and score.

Did you read the original Wilkie Collins novel in order to prepare?

Yes I did and it’s an outrageous suspenseful plot that still has the power to shock in its bold twists and turns. In this respect, it has as much in common with contemporary crime dramas as it does with other period shows. It’s an edge of your seat psychological thriller but uniquely contemporary and current in its themes, including the challenges women are subject to and the compromises they are forced to make to survive in oppressive patriarchal societies. It explores the consequences of unfettered male power and celebrates the ingenuity and tenacity of the female characters in their ability to stand up for themselves in the face of this. Personally for me, its brilliance partly lies in its extraordinary female characters - Marian Halcombe is a feminist icon for the ages - practical, brave, honest, and fearlessly devoted to her sister. Laura Fairlie’s story is testament to the endurance of the female spirit. I think Wilkie Collins would have wanted us to make this bold, contemporary and vital for now and I feel that’s what we have done with this adaptation.

What was the biggest challenge on set for you as a director?

It’s a challenge being on top of five hours of a story when you are shooting out of sequence across five episodes so you can shoot out each location. It is basically shooting a five-hour film. Actors often ask you what their character was doing before the scene you are shooting and you have to know.

How would you describe the tone of The Woman in White and what do you hope viewers will take from it?

Eben (our director of photography) and I coined the phrase neo-Victorian thriller, as our approach. It’s a love story within a mystery that unfolds into a thriller. As well as the mystery and suspense of the extraordinary narrative, I wanted to concentrate on the psychological exploration of the women. This approach plays to the strengths of the writing and I hope it will appeal to a contemporary audience who are used to the complexities of series such as True Detective and The Missing. It’s bold, vital and contemporary and I can’t think of a better time to tell this important story than now. I was looking to films such as Picnic At Hanging Rock and The Innocents, as well as more recent films such as The Childhood Of A Leader and Lady Macbeth where the traditional meets the contemporary.