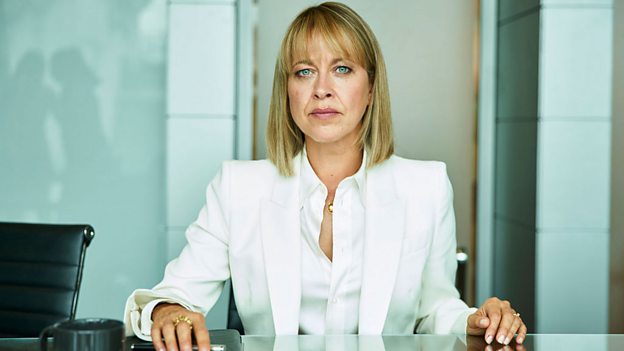 The show’s set in the world of divorce, but Abi’s actually writing about marriage and love, and what we do to each other when we’re married and when say we love each otherNicola Walker

Can you tell us a little about your character Hannah Defoe, and where we meet her at the beginning of the series?

Hannah is a respected and successful lawyer involved in big figure settlements. She was born into a family of divorce lawyers – her mother Ruth is feared and admired in their shared professional world. We meet Hannah at a pivotal moment in her personal and professional life – she’s spent her working life with the family firm Defoe’s, but controversially she’s leaving and joining rival firm Noble & Hale. It’s a huge moment for her.

She’s the oldest of three sisters, how would you describe her role within the family?

Ruth’s brought them up to believe it was the four of them against the world, and Hannah loves her sisters deeply. The thing about being the eldest, especially with their father abandoning the family when they were very small, is that Hannah’s always taken on a great deal of responsibility. She’s always been relied upon, and she held the family together in some ways when the father left, even though she was only a child herself. She’s a fixer within the family.

At the beginning of the series Hannah’s father Oscar returns after 30 years, what effect does it have on her?

It’s like a grenade being very gently dropped into her life. It forces her to re-evaluate everything about herself, everything that happened before this moment, how she moves forward. It brings the past back to haunt them. They’re all rocked by it.

As a divorce lawyer you’re dealing with intimate details of people’s relationships and navigating people through a stressful time in their lives – what sort of lawyer is Hannah, how would you describe her style?

She’s compassionate and empathetic with clients, but she’s also very honest with them. She’s not their therapist, she’s their lawyer. She’s less cynical than her mother – Hannah is hopeful that the process can be achieved without it being absolute hell for everyone involved. She’s aiming for that – it’s not always successful!

Is divorce law a world that you knew much about?

High-end divorce is a closed world. When I tried to research it I was really surprised about how little there is out there. I think that’s because of the nature of the subject matter – privacy is incredibly important to this level of client. The most I knew about it was the odd news report on very high profile, wealthy people in business or the celebrity world. Fortunately we were given the chance to speak to a brilliant family lawyer based in London who deals in exactly this level of divorce. She gave us a real window into the world.

Can you tell us about some of the cases Hannah encounters throughout the series?

Their work is incredibly varied at Noble & Hale, that’s part of the absolute joy of the series. We have an over-arching, very complicated divorce that’s happening between a very wealthy businessman and his wife. Along with that you have a new set of characters coming with different stories every week, and they’re not all divorces. We have a very complicated case about the ownership of stored embryos, a pre-nuptial agreement that’s in danger of not being pushed through involving a well-known sportsman.

Hannah’s been happily married to Nathan (played by Stephen Mangan) for a long time and they have three children, how would you describe their relationship?

They love each other. They’ve been together for a very long time. He’s totally involved with and very important to the whole family, he jokes at one point ‘you get one Defoe you get them all’. But there’s an issue underneath the marriage that they haven’t addressed.

How does Nathan react to Hannah working with Christie in her new firm, who was a bit of a rival in their university days?

They all knew each other at university. Nathan’s unnerved by Hannah working at the same firm as Christie, more than he would ever admit. He plays it down and he makes jokes about it, but it bothers him.

What have you enjoyed most about playing a divorce lawyer?

I’ve enjoyed how varied the cases are, that a different set of people week on week come to Hannah with a different set of problems. I enjoy playing someone who’s really good at her job – she gets brilliant settlements for her clients, and her victories are often very complicated but when they come they’re very sweet.

Is it a job you could do, do you think? What would you find hardest?

I doubt I would make it in that world. I think I’d get too emotionally involved, and then you’re no use to anybody. It is an intimate relationship between a divorce lawyer and their client. You find out everything about them and their marriage. That can become a very blurred line, but you are not being paid to be their friend or therapist, and your first duty is always to the court. I think I would probably find that really difficult.

Can you tell us about Hannah’s wardrobe as a lawyer, has it helped in getting into the role?

Hannah has an impressive wardrobe! Because of her job and because she’s at the high-end there’s an expectation from her clients in the way she presents herself. Abi refers to it as ‘putting on her armour’ for the day. It’s a real departure for me personally, I do not possess any of those clothes in my wardrobe! I made an astonishing discovery that when I wear anything that isn’t a trainer or a welly, when I’m put in high heels, I have an ability – and it’s a real skill – to clip the back of my heels and send a beautiful high shoe flying into the air. There are so many outtakes of Jess the director shouting ‘Cut! Her shoe’s come off again…’ – you’d see it flying over the heads of the crew. It must be about the way I walk. It took me three weeks to master it.

What is it about Abi’s writing that draws you to her material?

Abi’s understanding of human behaviour is just perfect. She notices everything – the best of ourselves, the worst of ourselves, and everything in between. The show’s set in the world of divorce, but Abi’s actually writing about marriage and love, and what we do to each other when we’re married and when say we love each other, and what we have done, and then what we will do to each other in the future – all in the name of love.