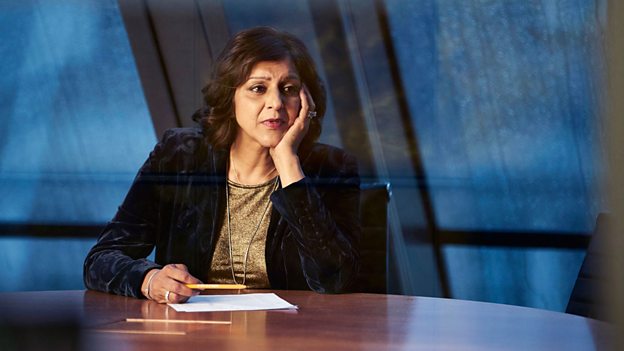 I felt very emotionally connected with it... I felt I really want to tell this story well for all women who’ve been through thisMeera Syal

Can you tell us a little about your character Goldie?

Goldie’s a self-made woman who’s been married for over 30 years to her childhood sweetheart Davey. Together they’ve built up this incredible business, they started on market stalls and are now multi-millionaires.

Where do we meet her at the beginning of the series?

Goldie’s called to a lawyer’s office thinking that they’re going to be discussing something to do with the business, and out of nowhere her husband and the love of her life turns round and says he wants a divorce. We follow her story through the six episodes. I think it’s a lot of women’s stories; of a supposedly happy long-term marriage which ends out of the blue. She genuinely has no reason why – as the series goes out she starts to find out what’s been going on.

The way Davey does it is absolutely heart-breaking, how does Goldie take it initially?

She’s in absolute shock. It’s one of those life-changing moments, like a bereavement. The second before it happens you have one kind of life and thought you were happy, and the second after it’s happened everything you thought was safe and had faith in has gone. But she’s a survivor, she has a back-bone of steel. So after the initial shock she decides she needs to know why.

Goldie takes on Hannah Defoe as her divorce lawyer, why does she choose her in particular?

There’s something about how she gets what’s happening to Goldie. She’s empathetic towards her beyond her professional interest that makes Goldie think I want someone like that – I want a fighter, but I also want someone who feels for me.

Divorce lawyers have to know intimate details about their clients, what’s Goldie’s and Hannah’s relationship like, and does it evolve throughout the series?

It does evolve, it almost crosses the line into friendship. I know that all the actresses playing lawyers said that when they were researching their parts the divorce lawyers they spoke to all said you can’t help but get emotionally involved with your clients, even though you can’t show it, because you’re dealing with the darkest, most painful areas in people’s lives. It’s a very intimate relationship, they know every bit of dirty laundry and every secret has to be put on the table.

We see the divorce play out across the whole series, what sort of journey does Goldie go on in that time?

I hope that people watching will really be rooting for her, and feel that were they in that situation they might be as brave – or reckless – as Goldie to do what she does. I felt very emotionally connected with it. We’ve all been through heartbreak, that’s something we all have in common as human beings – but I felt I really want to tell this story well for all women who’ve been through this. I’ve got friends who’ve been through it. I’m at an age now where you think couples have been together for 25, 30 years are safe, but the number of relationships in the last eighteen months that have broken up unexpectedly. You’re never safe really. You can be toddling along thinking everything’s fine and have no idea that the person who sleeps next to you might have a whole other life or set of feelings you don’t know about.

What does Goldie find most difficult about the whole process?

Balancing the need to be able to move on without being bitter, which I think is probably the challenge for every wronged person in a relationship. How do you move on, in a good way. And also acknowledging the good stuff that you did have, especially if you’ve got children, you’re always be connected in some way so how do you keep that relationship ongoing and non-toxic for everybody’s sake.

How does it impact on Goldie and Davey’s two grown-up children, and the family as a whole?

Everyone’s in shock. Inevitably people take sides, because there are two sides to every story, and the kids are right in the middle. I have friends whose parents have split up when they’re much older and they say you think it’s not going to hurt as much, but it’s a different kind of pain, you wonder how much of that happy family you grew up in was a complete sham. Whatever your age it can really affect you.

There’s something about other people’s marriages and relationships that’s fascinating to people, why do you think that is?

There’s no more statement of hope than a marriage is there? There’s no bigger statement that ‘I believe in love, I believe in us, I believe in happy endings’. Every single person that gets married expects to be married forever – for almost 50 per cent of people that’s wrong – that’s a big journey to go on! I think most of us know that the marriages that last have a fair amount of unhappiness and boredom, it takes hard work and compromise that aren’t very romantic to talk about. But talk to those couples who’ve been together for 50, 60 years like my parents, and that’s what they’ll say.