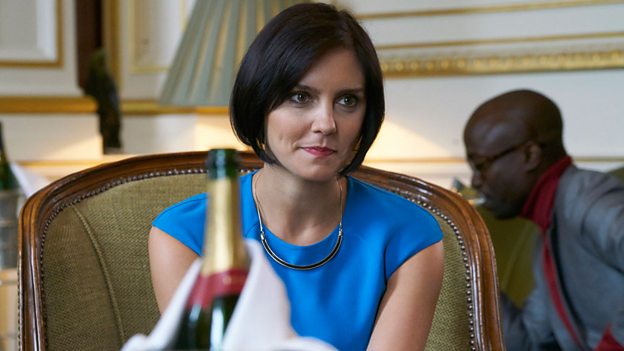 Where do we meet your character Nina Defoe at the beginning of the series?

Nina is the middle child of three, and she very much sits at the centre of the family in that she’s the mediator. Weirdly even though she’s not necessarily reliable on a practical level. She’s often late for things, she probably drinks too much, but she’s very reliable emotionally and she’d do anything for her mother and her two sisters. At the beginning of the series she’s treading water and falling under the surface a little bit. She’s constantly looking for her mother’s approval and has been hiding in her sister’s shadow. Now Hannah’s moved on and Nina takes her position in the firm, it’s sink or swim. I think she decides to swim!

Hannah is the person that Nina admires and respects the most, and who’s had the most important influence on her. She’s also the person she’s most competitive with, and who can really get under her skin. There’s a lot of humour in the script with the competitive sibling rivalry. But she adores her, she’d do anything for her.

What effect does their father Oscar’s return have on Nina?

Nina has a bizarre delayed reaction to their dad returning. Ultimately, she’s dealing with an emotional block. When they were left as children she just decided not to deal with it. This is a pivotal moment where the huge iceberg inside her is melting. First she thinks she can handle it – quickly she realises that’s not true and begins to unravel. She realises she’s furious with him and has missed out on an awful lot, and that maybe he’s responsible in some part for how she sees men. She’s a bit of a train-wreck when it comes to romance. It’s an emotional journey for her.

It comes at the same time as her sister Hannah leaves the family firm – how does this impact on Nina?

Nina thinks that Hannah is mum’s protégé. When Hannah starts at a rival firm they go head to head on a case and Nina surprises herself – she’s actually a really good lawyer. Her sibling rivalry makes her realise she’s not going to let her sister win. It’s quite explosive in the boardroom.

What sort of a lawyer is Nina, how would you describe her style?

At first I don’t think she realises she’s any good – then after Hannah leaves the firm she realises she is. She’s not great at turning up on time, because she likes to go out and let her hair down in the evening. She doesn’t follow the rules. She’ll quite often find a way round something, or try and get a piece of information by bending the rules – but only because she believes in something. She’s a good person to have on your side!

How did you go about researching this world?

We visited a family law firm which was incredibly thrilling and intimidating. We met a lawyer – an incredibly intelligent, top of her game, elegant tigress of a woman who we all completely fell in love with. She was fierce, a business woman, but she hid it beautifully so you felt relaxed with her – but she was totally in control of the situation. We chatted and got some tips.

How does Nina view marriage do you think? Is it influenced at all by her job?

It’s been drilled into the sisters by their mother from an early age that they don’t need a man. Letting her guard down with a man then possibly being left is the biggest fear in Nina’s life. I think that’ s because of her father leaving and the way her mother dealt with it, but I imagine seeing all these marriages fall apart and pre-nups is not helpful either!

Does Nina have any romantic relationships throughout the series?

I’m not sure she’d describe them as romantic! One of them turns into something romantic and it takes her by surprise. She’s definitely shopping around… there’s a couple of people who she’s got her eye on. But she doesn’t really know what she’s looking for.

Can you tell us about Nina’s wardrobe as a lawyer, and have the costumes helped you get into the role?

I’m so bad with labels! I was told that I was wearing an Erdem dress – pause for reaction – I said ‘OK!’ Then I went away and googled it and was like ‘oh my god – this is amazing’. It’s been eye-opening. I live in my gym gear or tracksuit but the costumes are incredible and so useful for character. Particularly trouser-suits. You put them on and feel immediately powerful.

Is being a divorce lawyer a job you could do, do you think? What would you find hardest?

I do – I don’t know whether I’m smart enough but I think it would suit my temperament. I like to be busy, I like the social worker aspect to it, I can be quite ballsy and I’m a bit of a control freak so I think I could run an office – and I’m competitive so I’d want to win the case!