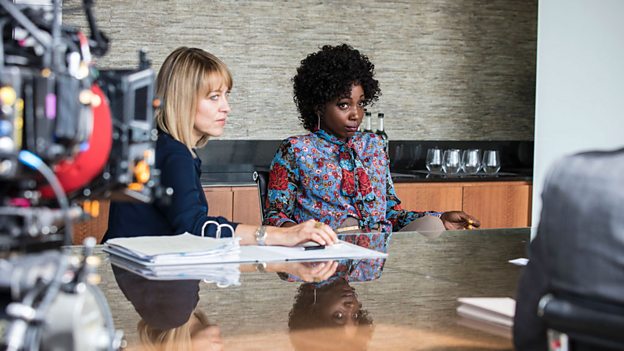 Ironically this is a drama about divorce but it’s an homage to marriageAbi Morgan, Creator and Writer

Where did the idea of exploring the world of divorce come from?

It originated from a conversation I had with a mother on a hockey pitch. She told me she was a divorce lawyer, to me law was male-dominated but she said divorce law is predominantly female. I immediately thought that’s an interesting world. Divorce lawyers are actually family lawyers, so deal with adoptive cases, surrogacy, pre-nups, post-nups. I realised the notion of family that feels very simple becomes complicated when you bring the law into it – the law exposes the fragile nature of family. We also live in a society where nearly 50% of marriages end in divorce, so inherently I’m always curious about how people sustain and make marriages work.

What insights into the profession did you get as you researched this world?

A lawyer I spoke to early on introduced the idea that London is the divorce capital of the world. One of the reasons for that had been instigated by a woman called Blanche Lucas, one of the first divorce lawyers who advocated for women not only to get alimony and a share of the house, but to get a lump sum of money, as an acknowledgement of how much they may have given in a relationship to supporting a man’s career. She was known as 'Lump Sum Lucas’ and was very famous in the Eighties. It triggered a number of people choosing to be divorced in the UK because it was so friendly to the spouse who had contributed to the marriage in ways other than income.

One of the most profound things a divorce lawyer I met said was ‘I don’t see divorce as failure, I see some marriages as finite’. That’s also at the heart of the series, that we put huge pressure on ourselves to have this happy ever after, and in a time where we live a lot longer and have so many more options and choices, and more opportunities for women to create their own wealth, it reconfigures what marriage is.

What were the biggest surprises or revelations from your research?

I was surprised at how complex and varied family law is – it’s not just divorces. There’s the complex world of pre-nups, which raises questions that make for an incredible story – legislating for an end when you’re at the beginning and in that bubble of love. Then there’s child arrangements and the rights of parents, surrogacy, issues around fertility. It suddenly felt like a very rich and complex world to interrogate.

The series is a brilliant mix of family and legal drama, did you always imagine this family of women at the heart of it?

There are certainly homages to all those great legal dramas from Ally McBeal to The Good Wife, but it doesn’t work purely as a procedural in that way. The legal drama is a Trojan horse to explore the family, centred around Ruth Defoe and her daughters Hannah, Nina and Rose. I wanted to explore a very female-centric world – I was a huge fan of Scorsese films and used to look at these big male ensembles and I wanted to see more female ensembles that weren’t just buddy movies. It was also a chance to have a multi-generational cast of women.

How would you describe the dynamic between Ruth and her daughters?

Ruth is a much admired, sparky, terrifying divorce lawyer and mother – she’s the ultimate career woman, she’s a survivor. She’s described as a Rottweiler and the Doyenne of the divorce law world. Ruth has been an incredible role model for her daughters and yet it’s a relationship not without its fractious elements. She’s created her own destiny and is keen for her own children to do that. Yet she’s also in many ways a traditionalist and wants her children to be happy and have the things she didn’t have. At the heart Ruth is an abandoned women who’s worked hard to fill the hole of that abandonment, and the legacy of that has rubbed off on her daughters.

In episode one we see Hannah encounter several big personal changes, how do these affect her?

The biggest change for Hannah is she’s left the family firm, so what we’re seeing is a new and reconfigured Hannah trying to find her sense of self away from being the stalwart of Defoe's. She enters a new, dynamic and much more contemporary world of divorce law through Noble & Hale, which brings its challenges and temptations – she has to find her place in this very competitive new environment. Hannah also collides with Christie Carmichael, a friend from her past, who as the drama unfolds we realise has much more emotional significance for her. When she’s confronted with the return of her father after 30 years and she’s forced to acknowledge that his abandonment has not been without scars. Hannah has to face the fault-line that’s left within her.

Was it important for you to show the beginnings of the journey of marriage with Rose’s storyline?

I wanted to explore what modern marriage meant, to explore why in the 21st-century, when women have fought and continue to fight to be emancipated, we still go into the patriarchal notion of marriage. And to understand that at its heart it’s about emotional union. I wanted to build towards something hopeful and use all the constraints and pressures of that – from the choosing of the dress, to who will walk her down the aisle, to the integration of in-laws, to what it means to not be religious but have a religious ceremony, how hard it is to believe in marriage when you don’t believe in God, yet you’re having a church wedding. There’s also the huge energy and joy a great marriage and a wedding can bring. In many ways when someone gets married you’re also marrying their family, so it’s also about the marriage of family.

Through the cases Hannah, Ruth and Nina encounter we get a snapshot of relationships at different points –how did you choose the stories? Were they inspired by any particular cases?

In a world that’s been drained of legal aid for most people mediation has become the biggest area of divorce law now, but we’re looking at the very high-end where there are still huge financial stakes. People who have public personas and huge social media coverage – from a number one arena-touring comedian and the acrimonious split with his comedy agent wife, to a premiership footballer who’s on the cusp of getting married to his glamour model girlfriend and the resonance of what the pre-nup will mean for both of them. We’re playing all the time with those splashy, vivid worlds, because I wanted to counter-point those with the very real and truthful and painful stories to show that divorce affects everybody, be it a politician or your average Joe. Divorce is a leveller.

Through Oscar’s return after 30 years we see the effect of divorce or separation on children once they reach adult life – which can be profound, but is not often talked about?

I think it’s because if you’re an adult of divorce you move towards the light and don’t self-reflect back. But it’s about Hannah understanding the other side of her parents’ divorce. She’s always seen the split from her mother’s perspective and it’s about her trying to understand her father’s side, realising that it’s a complex situation, and understanding that we cast villains in these roles, but actually in divorce law there are no villains.

The ways in which Hannah, Nina and Rose approach relationships is quite different, does this reflect the generational differences between them?

In many ways they represent three different areas of feminism. Hannah is a woman who’s had it all, who juggles marriage and a large family with a very busy and complex career. Nina, a woman absolutely dedicated to her career, who’s been a party girl most of her life and is reaching an age where the traditional notions of marriage and babies is slightly evading her and she’s thinking about the next stage of her life. And Rose, the artistic and tender heart of the family who can’t quite find her place in the world, and so is drawn into the ‘say yes to the dress’ fantasy of marriage yet living in her own denial about it. They’ve each had three very different responses to the legacy of divorce: one has run into traditional marriage, another is resisting marriage, and the third is trying to believe in the fantasy of marriage when she’s harbouring huge doubts.

There’s a Royal wedding on the horizon and a real feeling of excitement about it, what is it about marriage that still gets people excited, do you think?

Ironically this is a drama about divorce but it’s an homage to marriage. 50% of marriages do survive, and those marriages that don’t aren’t necessarily failures. Marriage is a terrific thing, it’s a union, a bringing together of tribes. I love watching Meghan and Harry, it’s hugely energising and life-affirming watching two people that are happy and in love. We fall in love with the romanticism of marriage but once the dress is packed away and forgotten about in the loft, the real nuts and bolts of a relationship has to be lived and experienced and managed. We put a lot of focus on the early years of romance and weddings, but we don’t talk about sustainability, how you sustain and survive in a marriage. That’s what The Split is about.

How important is it for you to write stories with female characters front and centre?

There’s always a moment for me when I sit and watch the credits at the end of a show, and I’m reminded about what a huge number of people it takes to make a drama. Effectively what you’re doing when you write a role is employing somebody. I want to write roles for women that justify their time and intelligence and talent. I do that for men as well, but I try and write strong roles for women as I want to try and employ as many actresses as I can.