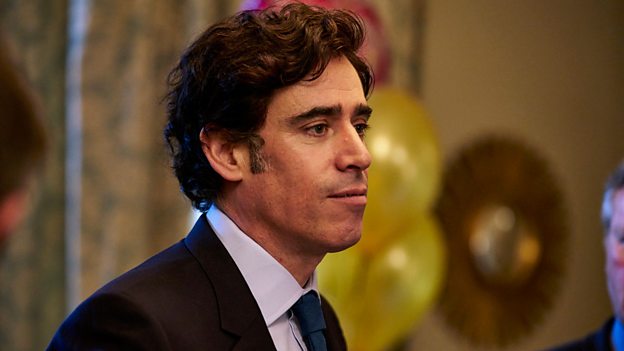 I do have a law degree. The reason I didn’t become a lawyer is because the law is trying to untangle the mess of human interactions and emotions and try and come up with something clear... I want to explore it, not untangle it.Stephen Mangan

Can you introduce us to your character Nathan, where do we meet him at the beginning of the series?

Nathan is a successful barrister specialising in family law, married to Hannah [played by Nicola Walker]. They have children, a lovely house, a very nice life, are both successful. It feels like a marriage of equals of two bright, ambitious, talented people. Everything seems terrific. It doesn’t stay that way.

Nathan’s been happily married to Hannah for a long time, how would you describe their relationship?

It’s a good one. They like each other, they love each other, they find each other attractive. They understand each other, she’s going through a difficult time having left the family law firm but he’s someone she can confide in. The first cloud on the horizon is the fact she’s now going to be working closely with someone they both know very well from their past, who she’s always held a bit of a flame for, Christie.

Nathan’s always had a sparky competitive relationship with Christie, partly over Hannah, and Nathan was the one who ended up marrying her. Christie is annoyingly good-looking – tall, blond, handsome, smart – but they have a grown-up relationship.

He’s married into the Defoes, how would you describe his role within the Defoe family?

He’s really part of the family. Ruth says ‘we don’t let many people in but we let you in’. He has a great relationship with both the sisters who adore him and he adores them.

Nathan and Hannah find themselves on a case together, can you tell us a bit about that?

Sometimes the law is operating in really interesting and complex areas of human interaction, and Nathan’s brought in to give advice on how a court might view a certain situation. A woman has had her embryos frozen and wants them to be considered as assets within any divorce settlement - Nathan’s brought in to throw some light on what the law might say. We’re dealing with people in often the most distressing times of their lives, divorce is well-known to be an incredibly emotionally-damaging journey to go on. The amount of hate can equal the amount of love you started out with. It’s a very delicate area, and it’s a really interesting area for a drama to be set in. What Abi’s done so brilliantly is combine the drama of the clients with the drama that’s created within the Defoe family, and Hannah and Nathan’s family.

Is the world of divorce law one that you knew much about? Did you do any research?

I do have a law degree. The reason I didn’t become a lawyer is because the law is trying to untangle the mess of human interactions and emotions and try and come up with something clear. To me the mess of human interaction is more interesting – I want to explore it, not untangle it. Family law is a very specific branch that I didn’t know much about. Traditionally it was always seen as the slightly poor relation to other branches of law, but it’s become a huge industry in the last 20 years or so with the rise of divorce and people’s much more complicated financial set ups.

As a divorce lawyer you’re dealing with intimate details of people’s relationships and navigating people through a stressful time in their lives – is it a job you could do, do you think?

No, I don’t think I could, it would be very hard not to get emotionally involved in the pain that they’re going through. I don’t know how you keep yourself detached from it. I know talking to barristers about the scenes of bitterness and resentment and anger in those final moments in court, and people screaming at each other in the hallways. No – I don’t think my psyche could take it!

What do you think it is about marriage that still gets people excited, even in this age of divorce?

It’s an expression of hope and optimism, an expression of belief in a good outcome. We have an ability as humans to live with this hope. They’re such beautiful things weddings, two people standing up and saying ‘I’m going to commit myself to you forever’. Marriage, children being born, spring, these are all signs of joy and hope – we prefer to think about things like that than death and decay and divorce!