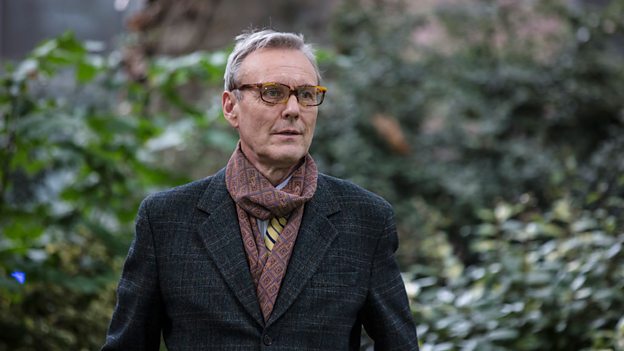 I must admit the scene when I offer myself up for giving Rose away I cried. I guess, because I was away for a chunk of my girls growing up when I was in America making BuffyAnthony Head

Can you tell us about your character Oscar, where do we meet him at the beginning of the series?

Oscar is the girls’ father who left when they were young because he fell in love with the nanny. He’s one of those people who doesn’t think about the repercussions or anyone else. He thinks ‘I have to do this – I’ve finally met my soulmate and I’m going to walk out on my three children and wife because it’s my destiny’. What’s clever about it is that he went abroad to America, and that means he’s an alien, he’s out of their world. So when he appears in the square that Hannah’s walking in he’s like a ghost. Her world shudders. He’s not exactly manipulative but he’s definitely trying to find his way back in. Over the six episodes we find out why.

What’s his relationship like with Ruth, how does she feel about his return?

Initially she’s quite angry! It undermines her relationship with the girls. But as you go through the series you see there is a relationship between Oscar and Ruth. Once the anger and the hurt has been put to one side there’s a couple of sweet moments where you can see there’s regret and why they were together.

Oscar’s been gone for 30 years and him coming back has a huge effect on Hannah, Nina and Rose, how do they respond initially?

There’s a scene where I meet the girls for the first time, and he is this strange alien. It’s like they’re meeting The Man Who Fell to Earth. He’s all smiley but there’s an undercurrent. Rose says "do we hug him, do we kiss him, what do we do?" There’s definitely a love there but he’s a stranger, which is fascinating.

Has him leaving affected his daughters differently?

Yes, definitely. They were 12, 8 and a baby when he left so were hit differently by the lack of a father figure. As we find out why he’s there and what’s he’s up to, that also affects them in different ways.

His youngest daughter Rose is getting married, and even though Oscar hasn’t been part of her life she still wants him to be involved in her wedding and to give her away. Is that something you’ve experienced, or have you thought about what it would be like?

It’s not I must admit, because my partner and I aren’t married, but if my daughters do it I’ll be there! I must admit the scene when I offer myself up for giving Rose away I cried. I guess, because I was away for a chunk of my girls growing up when I was in America making Buffy. I was there off-and-on for about eight years. When I was looking through some photos of our times together, it brought home how much I’d missed, because I could see them literally growing up in front of my eyes.

What is it about other people’s relationships that we find fascinating?

The concept of someone finding their soulmate is so extraordinary. You wonder how people ever imagine it’s going to be a dream. It has its highs and lows. A modern concept is you don’t work on it, you pull the plug and move onto the next – which in terms of life fulfilment is pretty narrow.