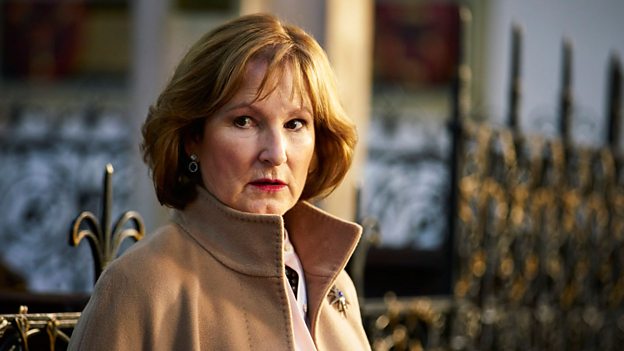 Abi’s written such brilliant parts for women, effortlessly. It is a fantastic thing to play a working woman at the top of her gameDeborah Findlay

Can you introduce your character Ruth and where we find her at the beginning of the series?

Ruth is the head of a family law firm called Defoe’s, which was created by her ex-husband’s family back in 1885. It’s got a huge tradition and she feels responsibility to continue it as a legacy for her daughters. She doesn’t want to relinquish her role as head of the firm which pushes Hannah to leave, to carry on up the ladder, which Ruth finds terribly hurtful. She has relied on Hannah hugely, and her leaving mirrors the fact that Ruth’s husband Oscar walked out on her 30 years ago, leaving her to bring up the children single-handedly.

Abi creates these beautifully authentic characters, it’s written with such heart and wit, when you first came to the character of Ruth what were your thoughts?

The writing is so intelligent and funny and emotionally accurate. With Ruth you start off thinking that she is powerful and controlling, and then gradually you find out more about what’s going on underneath and what’s gone on before and why she’s like she is. Abi’s written such brilliant parts for women, effortlessly. It is a fantastic thing to play a working woman at the top of her game.

She’s got a different relationship with each of her daughters, can you describe those?

Hannah was 12 when Oscar left, Nina 8, Rose was only a baby. Ruth was completely devastated and she fell apart for a bit. Hannah took on the role of mother for a while, Ruth relied on her and that continued as they grew up – she was the one Ruth could always count on in the family, and professionally. After Hannah leaves Ruth see’s Nina’s potential – she’s a bit of a wild child but somewhere in there she sees Nina could be an ace divorce lawyer. She’s rather bemused by Rose and doesn’t quite understand what she’s doing with her life because she’s not a lawyer and doesn’t seem to want a profession as such. I think Ruth is just waiting for Rose to do something with her life, she’s not terribly keen on the idea of her just getting married. She’s used tough love on all her children; she adores them but there’s not much over-affection really. They all share a great sense of humour, they all find each other very funny.

When Oscar comes back after 30 years what impact does it have on Ruth and the girls?

It tilts everybody’s world upside down. All the carefully constructed stories she’s told herself and her family start cracking apart. There’s a different version of events which they all have to deal with. What I found so interesting is that you think Ruth would deal with that betrayal 30 years ago in a cool, adult way, but she’s still incredibly hurt and affected by him and what he’s done.

What sort of lawyer is Ruth?

She’s the head of one of the top divorce firms in London, and London is the divorce capital of the world. People talk about her as a brilliant lawyer and I think she’s a formidable foe and a tigress for her clients. She works around the clock and that’s her life, I feel like she’s shut down her emotional life aside from her children and just works solidly for her clients.

Did you know much about this world before taking the role?

I knew nothing about this world except what I’d read about in the papers – the huge settlements and the extraordinary scenes of court hearings you’d see pictures of. We visited a couple of law firms in London and talked to some senior partners and that was fascinating. They were utterly charming and welcoming – and focussed – that was the thing that I picked up most. They wanted to know what you wanted from them and how they could help you. They did say they are not therapists, that is not their role as a divorce lawyer. For their clients they are absolutely understanding and compassionate, but the clock is ticking, which is an extraordinary mind-set I think.

The Split is centred around divorce law, it’s so much more than that, it becomes much more about family and the bonds between family with the Defoes at the heart of that.

Abi starts from the point of view that there is no happily ever after. In lots of traditional stories you go up to people finding a partner, getting married and that’s it. What’s so brilliant about this series is it’s such an adult view of life. It’s complicated, and our relationships are complicated. What’s ironic is that although these people who we meet are divorce lawyers, their expertise of handling divorce does not feed into how they handle their own lives and marriages!