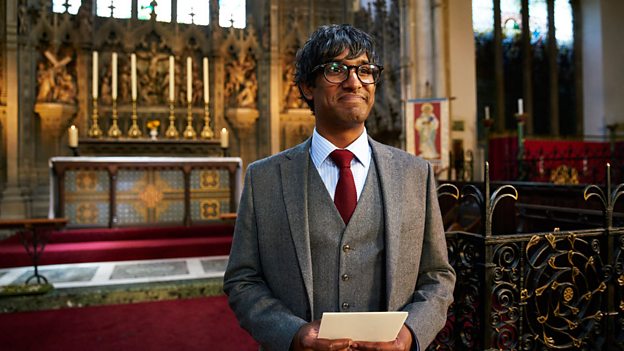 Where there’s a few relationships that are coming to an end in the series, you have this brilliant contrast of Rose and James who are at the beginning of that journeyRudi Dharmalingam

Who is your character James and where does he fit into the Defoe family?

James is the fiancé of Rose, the youngest of the Defoes. She’s the only one who’s not a divorce lawyer, she’s a nanny. She’s in a situation where she’s not quite sure what she wants. James grounds her, they’ve got a purity to their relationship in contrast to the opulence or high-class environment of the law industry. James works in finance, he’s got his own flat, his mum and dad are still together. Whereas Rose has had various events in her life that have shaped her and continue to shape her, James has a regular, stable life.

Rose and James are planning their wedding, how would you describe where they are and where their relationship is?

Rose and James have been together for a few years and got engaged fairly recently. It was Rose’s idea to have a church wedding, James isn’t religious and neither is Rose really, but James succumbs to the idea – if Rose really wants it, he’s happy to buy into it. He’s very considerate with her – she’s got various things going on in her life, he gives her that space and bites his lip. They’re planning their wedding, but they come across a few stumbling blocks on the way.

Rose comes with a pretty formidable family, what’s James’ relationship like with them?

James gets on well with her family. He probably feels they spend a bit too much time with them – Rose has this thing where she prefers to spend time with her family rather than with James’s. She thinks James’s mum and dad are a bit boring or ‘normal’ whereas her family is a bit more interesting, which is probably correct!

How does James feel about marriage?

James is traditional, he’s very conventional in his thinking of marriage. In his mind he imagines having children within the first year. He just assumes that’s what going to happen. Whether or not Rose agrees with that we’ll see.

You mentioned they have a few stumbling blocks along the way, as the marriage gets closer does that affect their relationship?

It does, hugely. But despite what happens along the way James has a huge amount of love for Rose and vice versa, and they think they can work their way around anything that gets put in their way. Where there’s a few relationships that are coming to an end in the series, you have this brilliant contrast of Rose and James who are at the beginning of that journey.

You mentioned you’re married, can you relate to the stress that Rose and James go through with planning with a wedding?

For me the most exciting part of planning the wedding was the playlist! I didn’t enjoy hiring suits or deciding what favours, all these traditions that you go through. A big thing that caused a few heated conversations was the table plan – who sits next to who, all the kind of politics that gets in the way.

What do you think The Split has to say about relationships and love and marriage?

Relationships are difficult, I always say this to people about to get married. I’ve been with my wife since I was 18 – all of my adult life – which is unusual. We’ve had hard times, we’ve had amazing times, it all comes down to how much you love that other person. If you really love each other, if you’re both willing to get through those difficult times, anything is achievable. Relationships need work and dedication and loyalty and trust, and all those things that we take for granted.