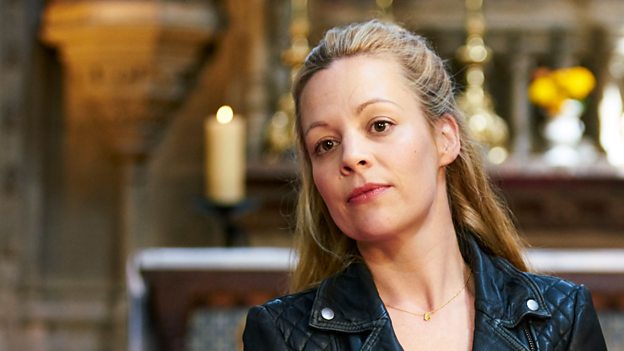 My parents are divorced too so I have quite a lot in common with Rose... Planning a wedding and having a mum and dad who aren’t together poses a lot of problemsFiona Button

Can you tell us a little about your character Rose Defoe and where we meet her at the beginning of the series?

Rose Defoe is the youngest of the Defoe sisters and we first meet her at the early stages of preparing for her wedding.

As the youngest how does she fit into the family dynamic?

She’s the baby of the family and has always been treated slightly differently to the other two. She starts to rebel against this as the series goes on. She’s the only one in the family who isn’t a workaholic, she tries desperately to keep them all close but unfortunately her mother and her sisters are impossible to pin down, so that’s quite a hard task.

She's planning her wedding to James, how would you describe their relationship?

They’ve been together quite a while and are first loves. They are getting married but it’s putting quite a lot of pressure on the relationship. The things about James that really irritate Rose have become magnified and more and more unbearable. As the series goes on and she’s confronted with the stages of preparing for a wedding it sends her into a blind panic.

Is the way she approaches relationships influenced by her family?

Instinctively she didn’t want to get married, that’s not to say she didn’t want to be with James, but part of the reason she’s going for the big fairy tale wedding is to stick two fingers up to her family. Also she sees it as something fixed and stable – if you get married you’re winning at life. Because of Rose not having a career, and feeling a bit lost, getting married is a way of her feeling like she’s doing something worthwhile.

How's she feeling about the wedding, what sort of bride-to-be is she?

It’s really mixed. On the one hand she’s diving into it and getting herself into wedding prep and mood boards and buying dresses, but it’s mixed with a real fear. She’s trying to cover up that fear and make it a fabulous, traditional wedding with all the frills, but it starts becoming a problem because there’s a lot of things about weddings that she doesn’t like, that she finds terrifying.

Did doing the series bring back any memories of planning your own wedding?

Definitely. My parents are divorced too so I have quite a lot in common with Rose in that way. Planning a wedding and having a mum and dad who aren’t together poses a lot of problems. Rose wouldn’t have had to deal with that. But then Oscar, her dad, comes back and it brings back a whole load of surprising and very strong emotions in her which she didn’t even know were there. By asking him to give her away she’s trying to make it seem like she has this normal, happy family situation. But it doesn’t really work out like that.

What do her sisters and mum make of the impending marriage?

They think it’s ridiculous! They’re very eye-roll-y about the whole thing. There’s a lot of love between the four of them but because of the closeness they don’t really hold back. Nina, Hannah and Ruth are not afraid to tell Rose exactly what they think and that can be extremely upsetting for her. But it also makes her more determined to carry on with the wedding as she’d envisaged.

The sisters' father Oscar comes back on the scene having abandoned the family 30 years ago, what's Rose's response to this?

She’s really surprised by her own reaction to his return. She’d always felt like her sisters and her mother were everything and enough, but once the thing that’s missing has come back there’s that huge void you feel you’ve missed out on. Suddenly there’s this person who’s your father who loves you and wants to know you, but you don’t know him at all and haven’t seen him in such a long time. It becomes a really confusing and difficult time for Rose because of that.

What is it about marriage and weddings that makes people so excited do you think?

It’s several things, everybody loves a party and an excuse to have a good time and have fun, but it’s also about a load of people coming together on one specific day and all wanting the same thing for two people. Everybody wants for that couple to make it and to be happy – to live happily ever after. That will and positive energy is something that really is felt on a wedding day. It’s such a joyous and happy time.