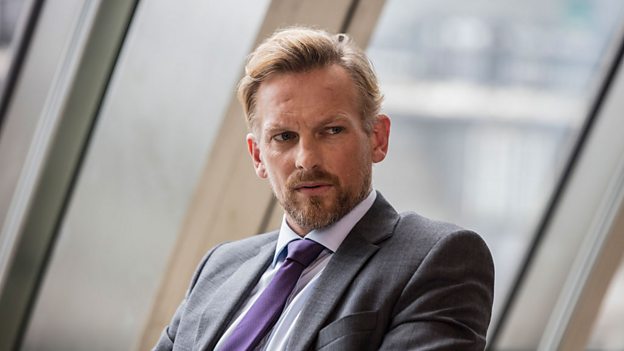 I studied law before I switched to theatre school so for me it wasn’t totally weird – it was more like I finally get the chance to play a lawyer, the profession my parents would have preferred!Barry Atsma

Can you introduce us to your character Christie, and tell us where we meet him at the beginning of the series?

Christie is a top lawyer specialising in family law, educated around the world. He’s been working in Asia for a few years, more of an international guy than a Dutch guy! He and Hannah studied at University together and became great friends. We meet Christie at the moment he’s back in London, and back in the city where Hannah is, and she’s just started in the company where he works.

They haven’t seen each other for years, Hannah got married to Nathan – who Christie knows, and he doesn’t really believe it’s a good match. Hannah’s a brilliant lawyer, is funny, a very special woman in Christie’s view – her openness, her liveliness, her energy makes her incredibly attractive for him. He’s always been overwhelmed by her charisma and that hasn’t changed.

Christie and Nathan do cross paths a few times, what are those encounters like?

In their professions they’re both top dogs, they’re really good at what they do, both charismatic and clever guys – but there’s a tension between them because of Hannah. They have some confrontations.

You play a top family lawyer, was it a world that you knew much about before the series?

I studied law before I switched to theatre school so for me it wasn’t totally weird – it was more like I finally get the chance to play a lawyer, the profession my parents would have preferred! I liked studying law, I’m still very interested in it.

Was there anything that surprised you about divorce law?

I’m divorced myself so I know the sensitivity and the emotional state you’re in when you divorce which is awful. I remember what was really hard at the time is that you’re so convinced you’re right, you so want your pain to be seen, that you can’t see your own wrongs and the mistakes you made. That’s a hard situation, and what creates all these crazy fights in divorces. So I was really touched by the writing – it’s so realistic and funny and awful – people often behave like children when they divorce. It’s so fun to play because it’s about the basic emotions of humans – these people are screaming for their pain and fears and hopes, their shattered dreams, to be seen and heard.

The series is about divorce but it’s about relationships in all their forms, how would describe Christie’s approach to relationships?

He’s in an interesting transitioning moment. This is a guy who’s ambitious and intelligent and energy-driven, he was out for the perfect career all his life, and for him love was sexual desire. Of course he had relationships but I think he never really realised what real love was about – it’s vulnerable and painful and you really have to invest in it, and he wasn’t really ready for that. So now we see this guy in his 40s, he’s been hugely successful but has ended up really lonely, not having any real, devoted relationships. He suddenly realises this is not what life is about. He’s missing a real love in his life.

What is it about other people’s relationships that people find fascinating do you think?

We’re interested because they reflect what we’re struggling with ourselves. That’s why this series is so interesting – it’s the spectrum of all these different kinds of relationships that people can relate to. By laughing and crying about it, and being touched by their problems you can think about your own relationships. It’s a very entertaining therapy I guess!