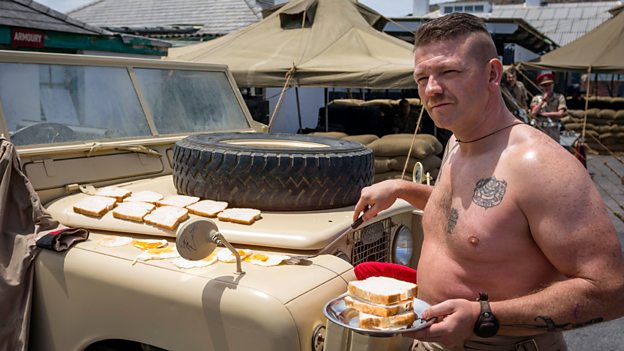 All the successful soldiers I’ve met are the ones who have managed to just do their job, and not think about it.Chris Reilly

Tell us a bit about your character, Sergeant Alex Baxter.

I’ve played thirteen different army soldiers in my career and Baxter has the biggest dichotomy in his character: he’s the strongest person I’ve played but also the most sensitive. And he’s not afraid of his sensitive side; he wears it on his sleeve and doesn’t see it as a weakness. He’s also got this grief that he has to deal with, and it’s really interesting to play, not so much the numbness but the more physical manifestations of grief.

I went to Bulgaria for three weeks and I trained with Tony Blair’s bodyguard and contract soldiers from the foreign legion and Special Forces. Instantly they take you under their wing, and they bond very closely, it’s just what they do. Much like actors on set need to be very close in order to work properly. Of course these guys need to put their lives in each other’s hands.

I also did a week of boot camp down on location here in South Africa with the rest of the male cast to prepare. They segregated our accommodation so the actors playing officers were in one place and the actors playing grunts in the other. So as much as we’re bonded, we’re bonded in the proper way. I think that was by design so we know where the boundaries are.

Is it helpful to be in a landscape that is similar to Aden?

Yes, definitely, especially the heat. If I’d had my way we would have stayed in the barracks set!

Did you know much about the situation in Aden before the project?

Nothing. But funnily enough, my friend’s dad had been a soldier in Aden. So I spent a bit of time with him before I came down here. He was more than happy to help, he brought out the maps, told me all sorts of things about his experience and about almost getting captured - he was on the medical side of things so would arrive at places before there was any support. He gave me a lot of helpful information. But the day-to-day stuff I got more from the modern soldiers I trained with.

Have you had to film some combat scenes?

So far it’s been more about the way the men have bonded, and at the moment we’re an occupying force and though things are dangerous, the situation is just starting to heat up. We’re a bit off guard at this point, a bit podgy and slow, but the situation heats up soon and we transform quite a bit.

Do you think by the end the soldiers begin to question what they are doing there?

Every soldier I’ve spoken to, they are thinking to themselves, “what are we doing here”? But there is also a mindset of I’m not here to ask that question, I am the instrument of policy. All the successful soldiers I’ve met are the ones who have managed to just do their job, and not think about it.