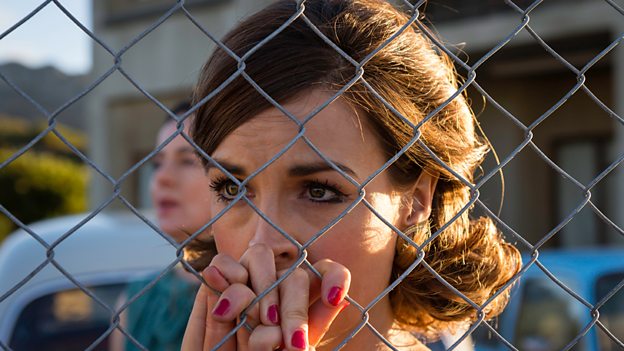 The Last Post raises all the critical issues of a receding empire: what we leave behind, the arrogance, the mess, and the grey areas.Jessica Raine

What kind of woman is your character, Alison Laithwaite?

She is witty but she hums with dissatisfaction, and she’s on a path of self-destruction littered with downed gin and tonics. I imagine her stalking around her apartment, climbing the walls with boredom. She’s desperate to have fun but there’s not much of the type of fun she wants in the strict military environment.

She seems to be a woman ahead of her time; does this create a struggle for her?

She’s very liberated in the way she thinks and acts. Everything about her is forward looking and she needs constant entertainment and stimulation. To be quite literally locked away in a compound on an army base is a very real hell for her. But she gamely tries to survive it by throwing herself into drinking and dancing at every opportunity.

How did the female characters and cast bond?

I think we have a very strong team of actresses on this production. Watching them work filled me with confidence and made me raise my game. It has been a complete delight to mine the relationship between Honor and Alison; they quickly become very close and support each other in a beautiful way. The feminine and the masculine worlds are so separate, and we were often as groups of actors like ships in the night passing each other on the way to set! But that felt right, mimicking how it must have been.

Alison and her husband, Lt. Ed Laithwaite (Stephen Campbell Moore), seem in crisis at the start of the drama. Do you feel hopeful for their marriage?

They have grown accustomed to the disconnect between them, and of course Alison clearly has a reputation among Ed’s colleagues. But Ed never ever judges her, and his utter support of her is one of the most touching and surprising things about their relationship. I love how they are both rule breakers, questioning and testing the fabric of army life. Together they are a very subversive couple - I think perfectly suited - and I am hopeful for them.

What have been the highlights and challenges of the shoot?

It’s been a joyous shoot, and filming in Cape Town while it’s winter in England has been a real treat. The heat, especially in the desert, was a challenge. But the payoff to that landscape is phenomenal. And I really loved driving that little blue Fiat!

Life for families in the British Army in Aden in the 1960s will be new to most viewers - how would you describe it?

During my research I stumbled upon an internet forum for people who were children in Aden in the 60s. Their words and images offered a snapshot of families living an idyllic life, occasionally shattered by the odd grenade being lobbed over the wall, deliberately targeting children and families. It was hard to get my head around living in that situation. There is something funny and disturbing about trying to maintain British values under those conditions, whilst blithely unaware that they’re not welcomed there.

Do you think The Last Post is a timely piece?

What drew me to this piece is the central question: what the hell is Great Britain doing in Aden? The Last Post raises all the critical issues of a receding empire: what we leave behind, the arrogance, the mess, and the grey areas. The fact that there are no easy answers, no good guys and bad guys, make it a great drama. And yes, a very timely one too.