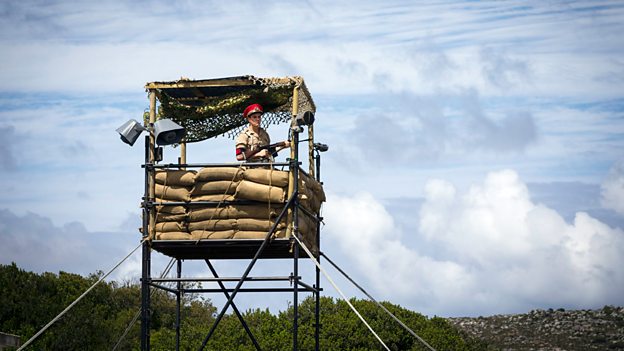 Tell us a little bit about how this project came about?

MB: I knew Peter Moffat had a military family background and I went to him with the idea of writing a story about the British Army that also looked at what it's like being married to a soldier and living on an army base as a family.

Peter rather brilliantly suggested setting the series the 1960s at the end of the British Empire with our soldiers and their wives posted in strategically important, dangerous and exotic places, which gave the story huge stakes and a way to explore Britain in the late twentieth century through the prism of a tightly knit group of people.

It absolutely felt like a BBC One show and they loved the idea so we began development. Peter had several other series greenlit at the time so it then took several years before he was free to write, which we spent researching and talking a lot so I’d like to think it was all useful preparation time!

Tell us about the decision to film in South Africa?

MP: In looking for a match for Aden we knew we needed coast, mountains and desert but with a colonial influence in terms of architecture. Cape Town doubled perfectly for all these elements so it was an easy decision to base ourselves there. Finding a disused British naval base that overlooked Simon’s Town bay enabled us to give our drama the kind of scale it is normally difficult to achieve on a television shoot.

How does the story of the Aden Emergency, around which the drama is based and which happened in the 1960s, resonate today?

MP: It does feel as if we have shone a light on a little known piece of our history. In the 1960s Britain made a conscious decision to dismantle the Empire, but often our haste to withdraw simply left a vacuum to be filled and sadly the price for this policy is still being felt in the Yemen today. Looking at more recent interventions in Iraq and Afghanistan, the problem of what happens when we withdraw seems no closer to a solution today than it was 50 years ago.

There is fantastic and in some cases explosive chemistry between the actors; tell us about the casting process.

MB: We have an ensemble cast of characters in the series, which meant director Jonny Campbell and we had a jigsaw puzzle to put together the right balance in casting. We were very fortunate that Peter writes such rich and unexpected characters we could attract a hugely talented, calibre cast. All our cast deeply identified with their characters and their relationships so really invested in where their stories took them.

What do you hope audiences will take away from watching The Last Post?

MP: At its core The Last Post is a drama about ordinary people - soldiers, wives, and families - living in an extraordinary place at an extraordinary time. But The Last Post is very much a character based drama rather than a dramatized history lesson and as ever with great drama, all you can hope is that audiences will fall in love with our characters and will want to follow their stories moving forward.