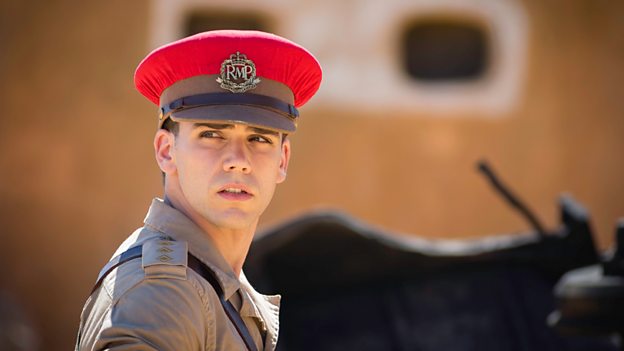 I think the reason he is in the military has more to do with his desire to escape [...] than wanting to be a good soldier or leader of men.Jeremy Neumark Jones

You might expect a sense of duty to his men or wanting to prove himself and I think those things may probably be true but what underpins all of that is that he has this dark secret he is trying to escape from and he is using both the Royal Military Police and also his marriage to Honor to do that. I think the reason he is in the military has more to do with his desire to escape those things than wanting to be a good soldier or leader of men.

Tell me about his relationship with Honor (Jessie Buckley)?

The time frame between meeting and marrying Honor is relatively very short and I think that says a lot about their relationship. It is a different time and therefore husband and wife relations, especially in the military and even more so on a military base, are formalised and very different to how we would experience them now. A crucial thing for them is that they are confronted with these two archetypes in the form of Major Markham and his wife and the Laithwaites; both of them reflect some qualities you would want in a marriage and some you wouldn’t and I think it provides some sort of existential worry for them because they don’t know each other yet. But they love each other and over the course of the series they are discovering whether or not they can be married and how they can live with each other and make that work.

Do you have any experience of the military?

I was in the cadet corps for the whole time that I was at school. I was a corporal, which is not a high-ranking officer. You do get to meet higher ranking people and a couple of my friends from school went on to Sandhurst and became officers. You get a sense of the type of people who are attracted to those kinds of positions and how they deal with the responsibilities once they are there. I think it is a very specific type of training that you get and it is a specific type of attitude you have to have in order to do it. They have to lead which a lot of the time means they have to be the first person to take on all of the responsibility and have to be willing to put themselves through these insane tests of metal and valour. That is part of what the army’s conception of being a leader is. So I think that says a lot about them psychologically.

What did you find most challenging filming in South Africa?

There was one day when it was 45 degrees and it is astonishingly hard to deal with. As soon as you drank the water would just evaporate back out because it was so dry and so hot. My hair is still a couple of shades lighter due to sun bleaching.

I did all of my own driving on set. Most of the time what I had to do was not particularly hard, it was going fast in a straight line or around a corner fast which is fine once you are used to driving the land rovers. There was one scene where I perform a rescue from a village and I had to drive up, skid, jump out of the car, leave it running, drag someone back to the land rover, then get in, reverse out, spin it around and drive off. It was amazing and so much fun but it was one of those moments where I just had my heart in my mouth and just had to pluck up the courage and just see if I could do it. We only had two takes to do that scene - no pressure! The DOP was standing right there and I thought "right well if I hit him on the first take that will be the end of the shoot…"