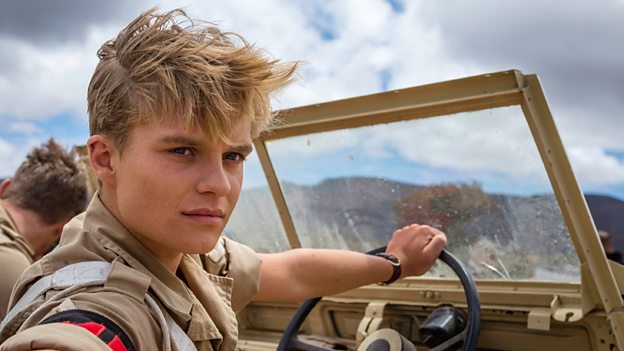 I’ve never actually been exposed to the hardships that proper soldiers endure. I also think you need a particular constitution to be a soldier - built a certain way and wired a certain way.Tom Glynn-Carney

Tell us about your character, Lance Corporal Tony Armstrong.

He’s from Manchester and he’s relatively new to the Royal Military Police. But he’s been in Aden for a few months before the story starts so he is relatively acclimatised. Peter Moffat has written a lot of cool, juicy stuff for Armstrong so he’s a really exciting character to play, with a lot of action, danger, and chase scenes.

Your character’s heart gets him into a heap of trouble.

Armstrong becomes completely besotted by a local Adeni girl, Yusra. They exchange various love letters, and they have to decide whether to act on their feelings. He is really torn between his feelings and his duty.

How do you get into the mindset of being dehydrated, injured, and stranded in the desert?

Well, I really pretty much was stranded in the desert! The closest person to me was about a mile and a half away. Feeling the sun on my neck and back and head, just roasting me to bits… you could see how your mind might start to go loopy from lack of nutrition and water.

Coming from Salford is it nice to be able to use your own accent and play a little bit closer to home?

Tell me about the training you did in preparation for filming?

We had a run through of the basic requirements that a soldier in the Royal Military Police would need to know: boot camp, tactical training, surveying, weapons handling, marching, saluting, that sort of thing. It definitely helped to be in a hot, dry climate as it was another ingredient that I didn’t have to imagine.

Do you think you could you have been a soldier instead of an actor?

I don’t know. I’ve never actually been exposed to the hardships that proper soldiers endure. I also think you need a particular constitution to be a soldier - built a certain way and wired a certain way. I don’t know if I’d be too good with being told what to do all the time. I am a law abider but I’ve got a lot of questions and opinions, so maybe not.

There’s a lot of camaraderie among the Royal Military Policemen but it’s also about duty and hierarchy. How have you explored that with the other actors?

I’m at the bottom of the food chain as a Lance Corporal. Me and Louis Greatorex, who plays Lance Corporal Paul Stoneham, are first through the door at a raid, first to be thrown into harm’s way. We’ve been hanging out a lot and we get on very well. But everyone has been great; the older lads are just twenty year olds in older bodies. This is my first principal role in TV. I’ve loved it and I’ve learned a lot. I’ve been lucky enough to spend time with a cast and crew that is down to earth, genuine, humble and creative.

You’ve had an extraordinary twelve months, haven’t you?

I had to leave my three-year acting course at Guildhall a little early to start filming Chris Nolan’s Dunkirk. It was an absolute dream come true. I’m lucky to have a great support system of friends and family back home, and I hope they will gather round for a weekly viewing of The Last Post.