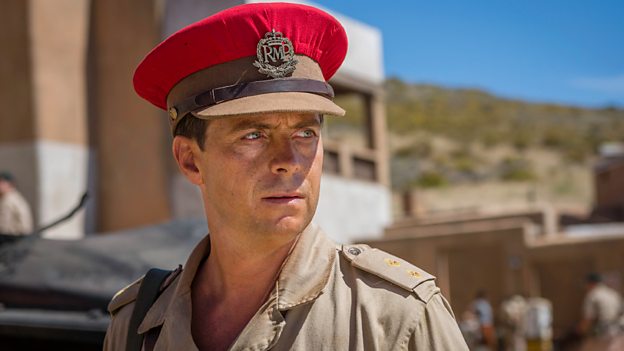 I'm sure the themes have relevance today. There are conflicts on every level: within ourselves and our conscience, between couples and also between nations and their ideals.Stephen Campbell Moore

Lieutenant Ed Laithwaite seems questioning and even at times disillusioned. How does this affect his ability to be a 'good soldier'?

Yes, Ed is disillusioned because his conscience is fighting what he sees happening around him and he finds it impossible to turn a blind eye. To be a 'good soldier' it is important to obey orders and the chain of command. His position gives him some leeway but the more he questions, the harder it gets.

Ed and Alison’s (Jessica Raine) marriage seems to be in free fall. What are Ed’s feelings about his wife and do you have hope for them as a couple?

Ed loves Alison. It's complicated because she associates him with being trapped in this 'army life'- but in reality they are both natural rebels and should naturally be co-conspirators rather than antagonists.

How did you prepare for the shoot? Did you research the period in history or were you already across the subject matter?

I knew very little about Britain's role in Aden, that it was a key strategic point as a coaling station from the time of Queen Victoria and subsequently an oil refinery, essential for trade for 150 years... placing the story in a wider historical context was fascinating. In reality few of the men out there would have understood the intricacies of the politics involved and Britain's interests in maintaining a hold on the region. There were global interests beyond the immediate rebel movement.

Do any of the themes in The Last Post have modern resonance?

I'm sure the themes have relevance today. There are conflicts on every level: within ourselves and our conscience, between couples and also between nations and their ideals. And within that - there is confusion between how people present themselves and where their real interests lie. Looking at this period in history is just like looking at the present.

Did the camaraderie of the troop spill over into life off set in South Africa?

It was a very happy set and the excitement of the shoot meant we got to share a lot of experience that bound us together. On our days off, we hung out and hiked Table Mountain or went to the beach. It was a lovely job and full of fun.

This is an action packed series; did you get involved in stunts?

There were plenty of stunts and we had to trust each other driving very fast along dirt tracks with potholes - in land rovers with no soft edges. We all survived though and I kind of miss it!