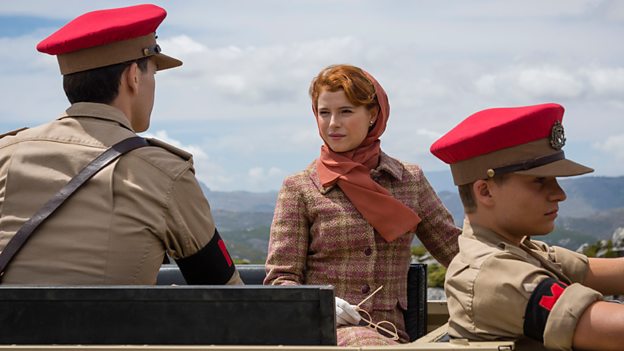 Filming a story set in a war zone in the 60s was such a treat as it gave me so much scope to dive into.Jessie Buckley

Tell us about your character, Honor Martin.

Honor Martin is the newlywed, wide-eyed military wife to Captain Joe Martin (Jeremy Neumark Jones). She lands in Aden with the eyes and enthusiasm of a child who wants to soak up all that this adventure has to offer in this exotic world. Little does she know however that the parameters don’t just exist around the army barracks but within her own marriage and she is hit with the stark reality of its loneliness and isolation. Through her friendships with Alison (Jessica Raine) and the other military wives she grows up and realises what is needed to survive the brutality of war whilst holding on to her open heart, full of love, life and hope.

How does she change as the series progresses?

Honor makes many mistakes and bakes a lot of dodgy cakes along the way, but from each fall she learns to pick herself up and learn from it. Her story is a real coming of age. She starts as this beguiled innocent girl who grows into a woman whose strength and bravery to question what is socially and morally right throughout the story injects life, truth and love into those around her who have become numbed by war…

How did you research Aden?

Filming a story set in a war zone in the 60s was such a treat as it gave me so much scope to dive into. Not only the world of Aden but also to explore where women were socially in the Sixties. The military wives weren’t just women going about their shopping in Selfridges, they held huge responsibility in being the emotional backbone to these men who were risking their lives day in and day out. I actually took a lot of inspiration from reading about people like Jackie Kennedy. Her story was similar in ways as she was groomed by the world to be a trophy wife in a political sphere yet she managed to fight and carve out her own identity.

Do you feel the script is very relatable to now?

Definitely. When you look at what’s going on in Syria, Iraq and around the world, the sheer bravery that people have to have, day in and day out, and still hold on to their normal lives and find hope is incredibly relevant.

How has it been working with Jeremy who plays your husband?

It’s been fab. He’s been such a pleasure to work with and we’ve had a lot of fun. The entire company and crew have been such a great group. We have been very lucky.

After War and Peace, how are you finding being the one in the nice frock for a change?

I’m loving it! It took a little getting used to as I’m not accustomed to putting on pink nail varnish regularly but it’s been great fun. Always good to shake it up and do something different.