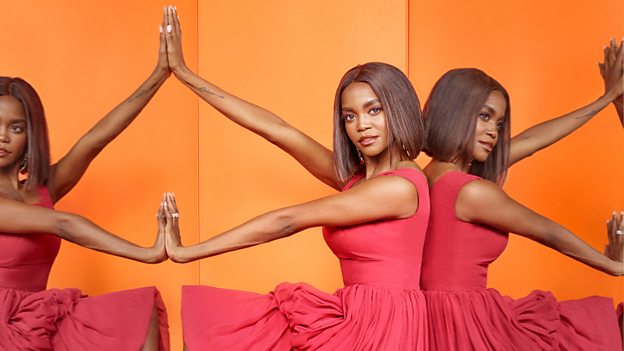 I think what’s really special about The Greatest Dancer is that the mentors actually work hand in hand with the acts and our aim and goal is to make them better, and we create a whole supportive atmosphere.Oti Mabuse

Category: BBC One; Entertainment
Oti is a professional dancer on Strictly Come Dancing, competing on the most recent series with cricketer Graeme Swann. Oti is also an eight-time Latin American champion in South Africa.

Could you take us through the format of how the show works?
So the format of the show is really, really special. It’s a celebration of dance. We have all different types of dancing from people from different ages coming to the studio and dancing in front of this really big mirror. If they dance really well and get 75 percent of the audience vote, then the mirror will open. What they don’t know is that there are actually three Dance Captains behind there and that it’s actually a theatre full of people. It’s also special because then they know the people are behind them.

As a Dance Captain, what is it you’re looking for?
I’m looking for something extraordinary. You have to be technically good, but you’ve also got to make sure the audience feels something too. So getting that right, the technicality and the emotion together, is definitely what I will be looking for.

What was your favourite moment during the auditions?
I had so many favourite moments. I got up with The Globe Girls, who were absolutely fabulous! They were all about energy and everybody loved them! And then there were the Latin and Ballroom kids who are my genre and I felt like I had something special to give to them. And a lot of the contemporary acts, they made me want to cry actually because it was so meaningful what they said and how they dance actually connected with me. The whole show is just special, because you feel a lot of emotions. You jump up, you cry, you get angry and you’re disappointed on behalf of some of the dancers. It’s a rollercoaster of emotions and that is what makes this show so great.

Have there been any dance styles that have surprised you? Anything you didn’t think you would enjoy but have?
I actually have been surprised. It’s not really the dancing that surprised me the most, it was the acts themselves! Lots of great characters. It's really important to always have a positive mind-set, no matter what people have been through. A lot of the time, how people enter and what they say before they start dancing usually either excites you or turns you off. For me that was really exciting: how when somebody would say something I was not into, or I was really, really into, and then they started dancing I was like -aaaah, this is not going to work!

Did the mirror sometimes not open and did you get angry with the audience?
There were times that I was disappointed by the audience for not putting a few acts through. Of course what I like and what is my personal taste doesn’t necessarily have to be what other people think. I think that’s what is nice about the entire show, it’s the audience who are in control. No matter what I think or what I do, I can’t really do anything except nurture, and actually tutor and help the acts.

You’re a professional dancer and on Strictly Come Dancing, so you know how it feels to be judged. What’s it like to be on the other side of the fence?
Being on Strictly is really special. I know first-hand what it’s like to be judged and to have someone criticise your creativity, your hard work and your art. Being on the other side is completely different because I’m on the side where I get to appreciate and inspire and motivate and nurture acts. I think what’s really special about The Greatest Dancer is that the mentors actually work hand in hand with the acts and our aim and goal is to make them better. We create a whole supportive atmosphere. And as a captain, it’s so much fun because I get to see the growth and the journey that the acts will take. I get to see first-hand as well what the audience want and what people at home like. It's special because I get to connect first-hand with the acts.

Who inspired you to get into dance and what was your very first dance memory?
My family plays a big part in my role as a dancer and my sister was my first trainer. She’s still my role model and inspiration until this day. She was my first trainer, she taught me my first steps. My mum was my first coach, she coached me for my first competition. I’ve literally only looked up to my family, because we are so competitive as a family as well and they always aim to be the best. My sister is a three-time German Champion, European and World Finalist. She was the first female from South Africa to do that. I mean, you can’t look for a better role model than someone who sleeps in the room next to you, and that has always been in my heart. If I ever need advice on judging, on dancing, on teaching, on creating, she’s always been the first person that I’ve contacted. And I think maybe the only person whose opinion really, really, really matters to me. So my family, all five of them.

So eight years ago you were going to be a civil engineer?
Yeah, ha ha ha! So eight years ago I was at university, wearing a lab coat and some construction boots and a hard hat and in my head I was going to build the biggest, longest bridge in South Africa, although we didn’t need one [laughs]. The goal was for me to become a civil engineer. But one day I really felt that it was important for me to do what I really loved. I was really good at engineering, but I didn’t have a passion for it, so going to work was something I had to do, not something that I really wanted to do. From that moment I remember I told my parents, "thank you very much for paying for my school education, I’m so so sorry but I’m leaving the continent".

Obviously this was a shock to them. Two of my older sisters had already left home, one had moved to Germany and I followed in her footsteps and I moved overseas. Then I started competing, doing dance competitions for six years, doing world championships, German championships and I really wanted to win those ones. I really wanted to be German Champion, and once I was German Champion it was like, right you’re 22, you’ve done it, now what?! And then Strictly in Germany, which is actually called Let’s Dance, contacted me. I did that for two seasons, and then another show came knocking at my door and I actually ended up doing Strictly in the UK.

Who is your dance idol?
There have been a lot of people who have influenced me and I look up to. Shirley Ballas, her judging on Strictly Come Dancing has absolutely been one of them, as one of the top female dancers who set the pathway for most of us to do what we do today. My sister is a great inspiration and role model to me. But a lot of the idols I have are in the Latin and Ballroom world, some of them I am friends with.